'Our priority is to strengthen grassroots democracy in J&K': PM Modi's Remarks at the All-Party Meeting with J-K Leaders

Prime Minister Narendra Modi stated after a three-hour meeting with party leaders in Jammu and Kashmir that delimitation must occur quickly for polls to be held. 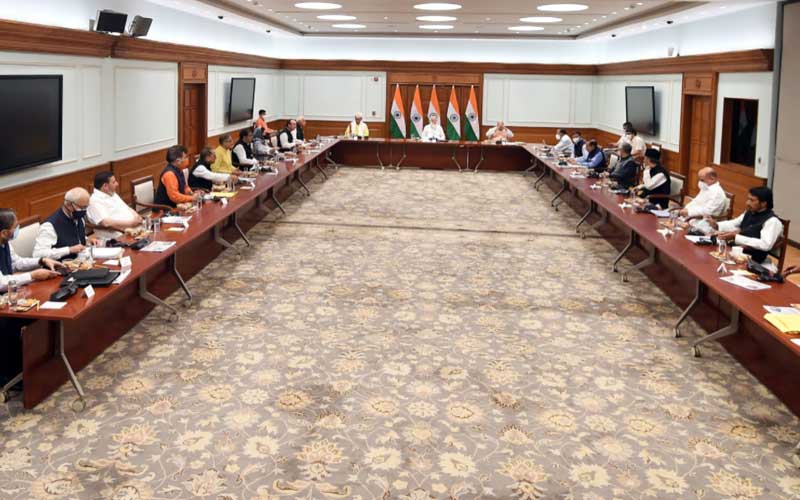 Following the meeting, Congress leader Ghulam Nabi Azad told reporters that they presented the PM with five demands: statehood, holding Assembly elections to restore democracy, rehabilitation of Kashmiri Pandits in J&K, the release of all political detainees, and changes to the domicile rules.

Fourteen mainstream Jammu and Kashmir leaders from eight political parties, including four Chief Ministers, attended the three-hour meeting aimed at resuming the political process in the region after it was downgraded from a state to two Union Territories - Jammu and Kashmir and Ladakh - under Article 370 of the Constitution in 2019.

Meanwhile, former J&K deputy chief minister Nirmal Singh claimed the PM urged the parties should work within the constitutional framework on the subject of Article 370. When the Gupkar Alliance parties raised the issue, Singh stated the PM promised a committee to secure the release of political prisoners. In the meeting, Union Home Minister Amit Shah presented data on the problem, claiming that only a dozen detainees remained in detention.

The Centre views the Delhi talks, which are the first since J&K's special status was revoked and it was divided into two Union Territories in 2019, as a significant step toward the return of representatives and the subsequent holding of Assembly elections in the two UTs to end the Central rule imposed in June 2018.

In a series of tweets after the meeting, the Prime Minister said.

“Today’s meeting with political leaders from Jammu and Kashmir is an important step in the ongoing efforts towards a developed and progressive J&K, where all-around growth is furthered.

Our priority is to strengthen grassroots democracy in J&K. Delimitation has to happen at a quick pace so that polls can happen and J&K gets an elected Government that gives strength to J&K’s development trajectory.

Our democracy’s biggest strength is the ability to sit across a table and exchange views. I told the leaders of J&K that it is the people, specially the youth who have to provide political leadership to J&K, and ensure their aspirations are duly fulfilled.”

"After August 5, 2019, the people of J&K are in a lot of trouble. They're enraged, furious, and emotionally broken. They are embarrassed. I told PM that the people of J&K do not accept the way Article 370 was repealed in an unlawful, criminal, and unethical manner "Mehbooba Mufti expressed her opinion.