Calling for the creation of aSashakt Bharat, a Swabhimani Bharat, and an Atmanirbhar Bharat that Vinoba ji and Gandhi ji had envisioned, the Vice President said that India’s concept of self-reliance is not about being ultra-nationalist and protectionist but to become a more significant partner in global welfare. 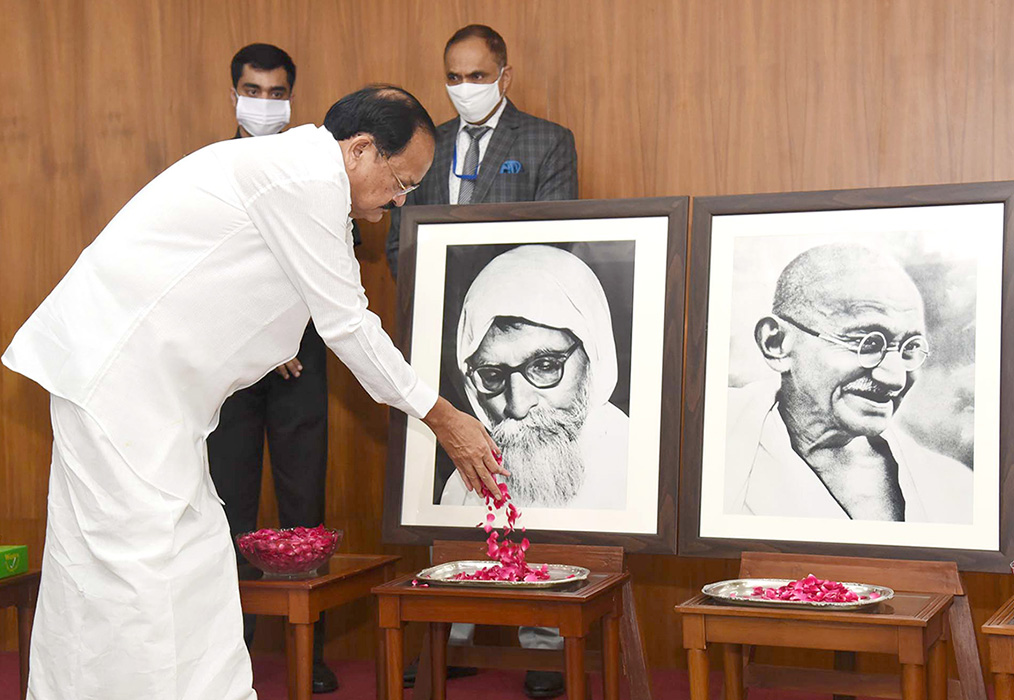 The Vice President, M Venkaiah Naidu called for the nurturing of entrepreneurial talent among the youth of the nation to make India ‘Atmanirbhar’ in the time to come. He said that we must tap into the entrepreneurial talent and technological skill of every citizen of the nation and harness our local resources to attain self-reliance and to serve the humanity at large.

He was addressing a Webinar on Acharya Vinoba Bhave’s contribution to the dissemination of Gandhi Ji’s philosophy for social uplift and Bhoodan Movement.

Calling for the creation of aSashakt Bharat, a Swabhimani Bharat, and an Atmanirbhar Bharat that Vinoba ji and Gandhi ji had envisioned, the Vice President said that India’s concept of self-reliance is not about being ultra-nationalist and protectionist but to become a more significant partner in global welfare.

Speaking of the timelessness of Mahatma Gandhi’s ideas,Shri Naidu said that Gandhi ji remains our beacon even today because he was an innovator who constantly experimented.

He said that Gandhi Ji had the courage to take up causes that were most challenging like untouchability.

“We admire him for his sincerity, his honesty and his deep empathy for the people he was serving”, he added.

Observing that Harijan Sevak Sangh was established by Mahatma Gandhi in 1932 out of his own deep conviction in the principles of Poona Pact, the Vice President said that to Gandhi Ji, Poona Pact was an article of faith and matter of trust to uplift the lives of depressed class, to restore justice and honour due to them.

Naidu said that our freedom struggle was not merely a political movement but also a call for a national resurgence and socio-cultural awakening. He opined that empowerment of masses was a key component of our freedom movement and said that Gandhi Ji wished for India to stay united against colonial rule, take great pride in its culture, language and rediscover its inherent strengths.

Observing that Mahatma Gandhi showed civility even in disobedience, the Vice President said that Gandhi Ji had internalized the ancient Indian ethos of ‘share and care’.

Terming Acharya Vinoba Bhave as an ideal disciple of Gandhiji, Naidu said that he believed that the essence of Indianness is a caring attitude and a spirit of sacrifice and service.

Speaking of the Acharya Vinoba Bhave’sBhoodan movement, the Vice President said that much like Gandhi Ji, Vinoba brought about change without coercion, without violence and demonstrated that positive, lasting changes are possible with people’s active participation.

Referring to the long walk of about 70,000 km undertaken by Vinoba Ji over the course of 14 years which resulted in the donation of 42 lakh acres of land for the landless farmers, the Vice President mentioned that Sri VedireRam Chandra Reddy of Pochampalli was first person to donate his 100 acres of land to Vinoba-Ji in response to his appeal.

Underscoring that Vinoba’s Sarvodaya movement and Gramdan concept exemplified the Gandhian ideal of village reconstruction and rural upliftment, the Vice President said that a trust in the goodness of human beings and the belief that the rich will share their prosperity with the disadvantaged population were Central to these initiatives. “It was a cooperative system for socio-economic upliftment of the villages”, he added.

Naidu said that Vinoba ji belonged to that long, inspirational lineage of Indian nationalists who gave direction to the social and economic progress of our people. He opined that a fitting tribute to Vinoba ji on his 125th Birth Anniversary would be to work in an integrated manner for the rural population constituting about 60 per cent of our population. Naidu also stressed upon the need to educate youngsters about the life and works of great leaders.

The Vice President called for equitable opportunities for growth to all, irrespective of caste, creed, religion and regionand said that we must essentially value individuals as individuals rather than as members of some social or economic group. He added that Sarvodaya and Antyodayawere necessary for social unity and economic equity.

Referring to the COVID-19 health emergency the Vice President said that in these testing times, we have to come together, pool our efforts, not only to contain the spread of virus but also to offer succour and solace, in a Gandhian way, to those who have been adversely affected by the lockdown. “The human spirit finds its noblest expression in times of adversity like this”, he added.

Shri Naidu said that in times like this, it is crucial to celebrate the work done by many non-governmental organizations and to recognize the selfless service being rendered by our doctors, paramedics, our security personnel and others who are keeping us safe. He said that we must also remember the farmers toiling on the fields and ensuring that we have enough food to eat.