Question Hour in the Lower House was disrupted for the third consecutive day in the Monsoon session of Parliament due to noisy protests by opposition members. 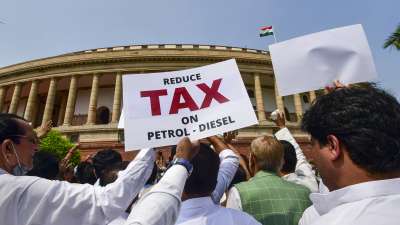 In the Lok Sabha, members of some opposition parties including Congress, DMK (DMK) made heavy noise on Tuesday on issues like inflation, GST, unemployment, due to which the proceedings were adjourned till 2 pm, about 15 minutes after the start.

Lok Sabha Speaker Om Birla asked to start the Question Hour when the proceedings of the Lower House began in the morning. But some opposition members, including the Congress, started raising slogans. Birla started the Question Hour in the midst of the uproar. During this some members asked questions and ministers gave answers. Meanwhile, the opposition members came near the Speaker's podium raising slogans. He had placards on which issues like increase in prices of essential commodities including LPG, hike in GST rates on many items were mentioned.

Lok Sabha Speaker asked DMK member TR Baalu ​​to sit in his place. He said that he would give an opportunity to speak after the question and if the members did not obey the chair, then permission would not be given. Birla said, "The discussion of the House is for dialogue, not for shouting slogans and members making noise in the House are bringing down the dignity of the House." It is because the public has not sent placards to show and shout slogans.