The Sikhs' holiest temple, the Golden Temple in Amritsar, was the target of Operation Bluestar, which began on June 1st, 1984 with a national broadcast by then-prime leader Indira Gandhi. 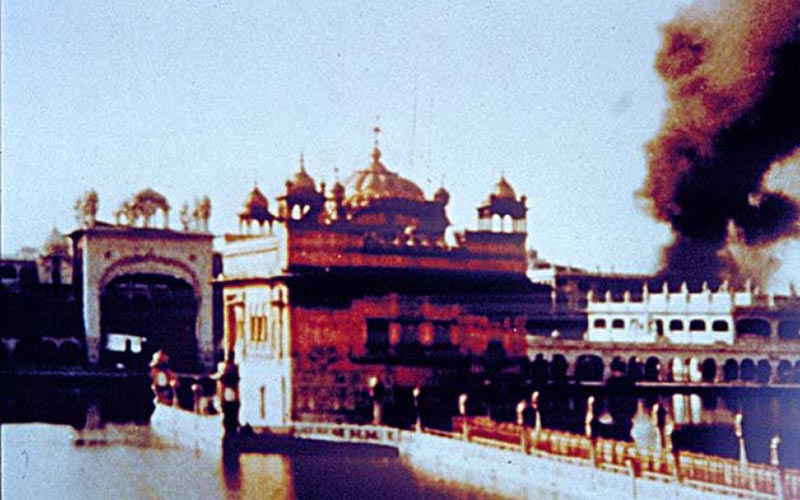 On Sunday, the 37th anniversary of Operation Blue Star was commemorated at Akal Takht in Amritsar under heavy security.

The Shiromani Gurdwara Parbandhak Committee has arranged a programme to commemorate the occasion.

6,000 police officers were stationed ahead of the event to prevent any riot-like or violent situation. Several Sikh organisations, like they do every year, planned to visit Akal Takht to commemorate the event, even as Punjab observes Sunday as a lockdown day.

The Sikhs' holiest temple, the Golden Temple in Amritsar, was the target of Operation Bluestar, which began on June 1st, 1984with a national broadcast by then-prime leader Indira Gandhi.

The operation lasted till June 10th, 1984and was conducted in order to detain Jarnail Singh Bhindranvale, a Sikh leader and his followers, who were later captured from the Harmandir Sahib Complex in Amritsar.

However, it was said to have been effectively concluded on June 6th with the ending of the remaining Sikh warriors' defiance to the army's arrival into the Temple.

Operation Blue Star was the Indian Army's biggest internal security mission undertaking. It was Indira Gandhi's response to Punjab's tumultuous law and order situation.The most credible figures of overall deaths during Operation Bluestar range between 5,000 and 7,000.

It was due to the popularity of the Khalistan movement in India that Operation Blue Star was born. The Khalistan movement can be described as a political Sikh nationalist movement that sought to establish an independent Sikh state inside the present Indian North-Western Republic.

DamdamiTaksal's chief, Bhindranwale, was one of the key reasons for Operation Blue Star, as he had taken control of the Akal Takht complex in the Golden temple. Bhindranwale made an impact on Sikh youth as a leader by encouraging them to adopt Sikh tenets and laws.

The goal of Operation Blue Star was to remove Jarnail Singh Bhindranwale from the Golden Temple complex and reclaim control of Harmandir Sahib.

The murder, damage, and sacrilege inflicted by Operation Bluestar broke the hearts of many Sikhs as well as Punjabi Hindus. Due to the political division over views toward Operation Bluestar has overtaken the human stories, the damage it inflicted in the personal lives of so many millions has yet to be completely chronicled and acknowledged., even as we commemorate its 37th anniversary.