On this day: 1983 World Cup, the first big sporting achievement for India

India defeated the two-time reigning champions West Indies in an iconic final at Lords to usher in a new era in Indian cricket. Although it took another 28 years for India to win the World Cup again, captained by MS Dhoni against Sri Lanka in front of a home crowd at Wankhede Stadium in 2011. 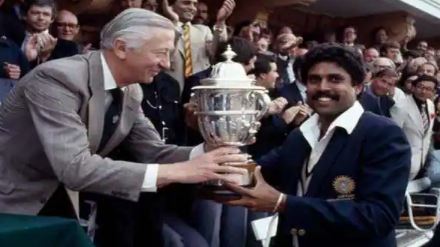 The 25th of June 1983 will forever be inscribed in the memories of every Indian cricket fan, since this was the day India was crowned the World Cricket Champions for the first time by winning the 1983 World Cup. India, led by the legendary all-rounder Kapil Dev, beat two-time defending champions West Indies in a historic final at the Lords to usher in a new era in Indian cricket. Nobody expected India to win the World Cup in 1983, when they faced the formidable Windies squad led by Clive Lloyd.

The team of West Indies included such stars as openers Gordon Greenidge and Desmond Haynes, as well as the great blaster Vivian Richards and skipper Lloyd, with Larry Gomes in the middle. Malcolm Marshall, Sir Andy Roberts, Joel Garner, and Michael Holding were among the bowling attack's - the most feared awesome foursome.

Following winning the toss, Lloyd put India to bat first. With barely two runs on the board, India lost its star opener Sunil Gavaskar. Though Kris Srikkanth and Mohinder Amarnath attempted to stabilise the innings, wickets continued to fall, and India was finally bowled out for a modest 183 from 54.4 overs out of their allotted 60 overs.

Few would have given Kapil Dev's team a chance in the game at the change of innings. Greenidge was the first to fall, bowled by Balwinder Sandhu with an inswinging ball. Vivian Richards who was in an aggressive mode, scored seven boundaries in his 33-minute stay at the wicket. A miscued shot off all-rounder Madan Lal's delivery was wonderfully collected by Kapil Dev racing backwards.

West India was reduced to 66/5 after all-rounder Roger Binny took the crucial wicket of Clive Lloyd, leaving them needing 117 runs more. Although West Indies attempted a comeback, with Jeff Dujon and Malcolm Marshall putting up a 43-run stand, they were finally bowled out for 140. India had accomplished the unthinkable by winning the match by 43 runs.

However, it took another 28 years for India to win the World Cup again, captained by MS Dhoni against Sri Lanka in front of a home crowd at Wankhede Stadium in 2011.