This is India's first medal in Tokyo Paralympics 2020. Bhavina has become the first player from India who has won a medal in Table Tennis. She is the only second women athlete in India to win a medal in the Paralympics. Deepa Malik had won a silver medal in Shot Put in Rio 2016. Competing in her maiden Paralympic, the 34-year-old Gujarat-based paddler Bhavina lost to Zhou Ying of China in women’s singles Class 4 category 0-3 (7-11, 5-11, 6-11). 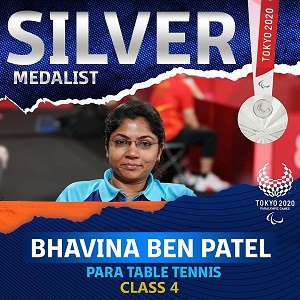 Competing in her maiden Paralympic, the 34-year-old Gujarat-based paddler lost to Zhou Ying of China in women’s singles Class 4 category 0-3 (7-11, 5-11, 6-11). Bhavina was up against World No. 1 player, who is much more experienced, she tried her best but could not match Zhou in the first two games. In third game Bhavina gave fight for every point and once levelled with 5-5 also, in the end, she lost but came out with her head high.

Zhou had also defeated Bhavina in the group stages but Bhavina came back strongly and played some exceptionally good matches to reach the final match.

Zhou Ying is one of the most decorated para-paddlers in China. She played her way through the junior ranks and continued her brilliance onto the international stage. The 32-year-old is a 5 time Paralympic gold medalist. She won two medals in each of the singles and team events during the 2008 and 2012 Paralympic campaigns. Although she missed out on the podium in singles at the 2016 Rio games, she managed to get to glory in the team event.

The Chinese paddler is also a 6-time World Championship medalist. Her medals include 5 gold and 1 silver medal. She is one of the best paddlers in Asia, having won 14 Asian Championship medals and 5 Asian Games gold medals.

Indian contingent went to Tokyo with a record of having competed in 11 editions of the Paralympic Games since its introduction in 1960, India has won 12 medals, including four gold, four silver and four bronze. India has won all medals in two sports athletics and Swimming but now Bhavina has added a new sport Table tennis to the list.

Bhavina has been given the best support by the Government in terms of international competitions, assistance towards procuring a Robot ‘Butterfly – Amicus Prime’ worth Rs 2.85 lakh, an Ottobock Wheelchair worth Rs 2.74 Lakh and a table. Other assistance included support towards Physiotherapy, Dietician, psychologist and coach fee to prepare for the Paralympic Games besides sport-specific equipment.