In Men's Footsteps, Indian Women's Hockey Team Also Loses In The Semi Final But Still has a Chance To win Bronze Medal

Argentina beat India 2-1 to reach the  Final of the Tokyo Olympic Games 2020.India will play for the Bronze Medal against Great Britain on Friday,  August 6, 2021, at 7 am IST. 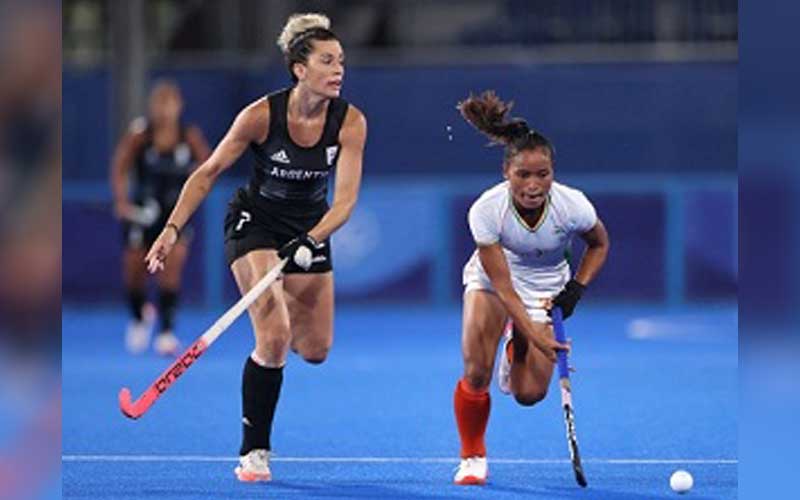 New Delhi: Indian Women's Hockey team gave a spritted display took the early lead in the second minute of the match but could not get past the opponent's goalkeeper, except once. On Wednesday evening walking in the footsteps of the Indian Men's team, the Indian Women's team also lost the Semi Final.  Argentina wins 2-1 to reach the  Final of the Tokyo Olympic Games 2020. India still has a chance to win the Bronze medal. They will play for the Bronze Medal against Great Britain on Friday,  August 6, 2021, at 7 am IST.

. The Indian team made a great start, making a circle penetration in the second minute of the match. Soon after, the Indians earned a Penalty Corner and Gurjit Kaur (2'), carrying out the drag-flick, didn't miss out on the opportunity to put India 1-0 ahead early on in the match. Argentina made a few inroads into the Indian circle in the eighth minute and earned a Penalty Corner. Argentina took a shot, but the ball was brilliantly deflected away by the Indian defence unit. India and Argentina played toe-to-toe against each other in a fast-paced game for the rest of the quarter.

Argentina made a brilliant run on the left flank in the third minute of the third quarter and made a circle penetration, however, the Indians directed the ball away from the goal. Soon after, Sharmila Devi made a great run on the left flank, however, the ball was intercepted by the Argentinians near the circle. Argentina continued to put pressure on the Indians and earned a Penalty Corner in the 5th minute of the third quarter. Captain Barrionuevo (36') converted another drag-flick to put her team 2-1 ahead in the match. The Indian team showed more intent after conceding the goal and made a few circle penetrations. However, the Indians couldn't find a way to breach the Argentinian defence as the two teams went into the third break with Argentina leading at 2-1.

The Indian team started the fourth quarter aggressively and put pressure on the Argentina defence unit. In the 5th minute of the final quarter, Navneet Kaur and Monika took the ball close to the goal. The former took a shot, but couldn't find the back of the net. Soon after, the Indians earned a Penalty Corner and Gurjit Kaur carried out the drag-flick, but her effort was saved brilliantly by the Argentinian Goalkeeper. The Indians kept pressing hard and putting pressure on the Argentinians for the rest of the quarter. The Indian team created a chance to score in the final minute of the match, however, their shot was saved by the Argentinian Goalkeeper. The Argentinians played out the final seconds of the match calmly and sealed a 2-1 victory to book a place in the Final.