On Tuesday, Neeraj has been forced to leave his welcome function organized in his home town Panipat. He was surfing from fever for the last 5-6 days but attending most of the function with illness. 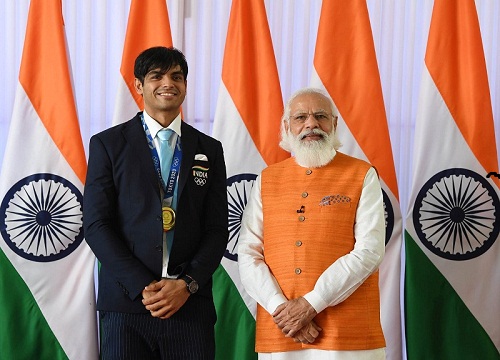 New Delhi: Olympic gold medalist Javelin thrower Neeraj Chopra has to be taken to the hospital due to a high fever. On Tuesday, Neeraj has been forced to leave his welcome function organized in his home town Panipat. He was suffering from fever for the last 5-6 days but attending most of the function with illness.

Neeraj, who was down with fever and sore throat, a few days back, underwent an RT-PCR test on the advice of doctors which has been reported negative. Due to fever and sore throat, he did not physically attend his felicitation function by the Haryana government also. According to  TV channel reports, Neeraj’s friends and family confirmed that he was uncomfortable during the ceremony and he got down from the stage midway in Panipat. He had been attending a car rally from Delhi to Panipat since morning and the journey took six hours, a double of the usual time.

On Saturday, Neeraj was present, at ‘High Tea’ hosted by the President of India Shri Ram Nath Kovind and he also attended the Independence Day Celebration at Red Fort on Sunday morning. In the evening Neeraj was honoured by Indian Olympic Association at Hotel Ashoka in New Delhi. During the function it was announced that Neeraj is having 102 fever and he remained there till 7.30 pm and on Monday morning he attended the breakfast party at PM House. it seems that the exertion has taken a toll on him.