Describing the video as untrue and baseless, the female professor said that this post is an insult to me and the university is being defamed. An attempt is being made to scare the educated woman out of this. 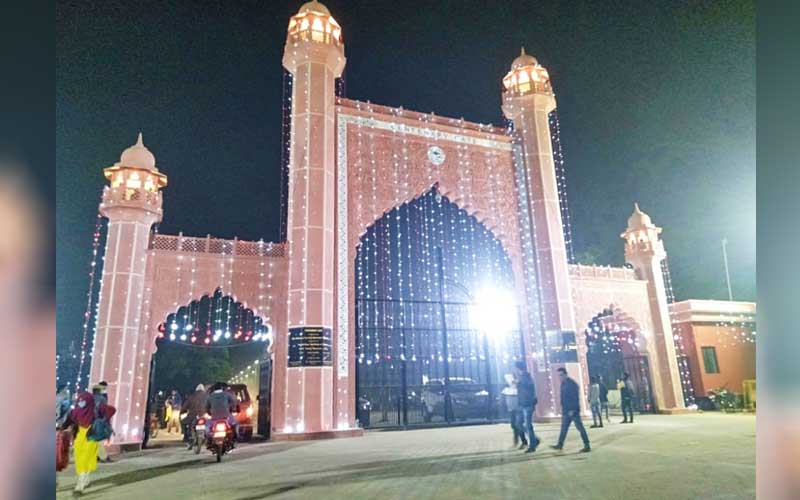 An alleged obscene video of a female professor of Aligarh Muslim University in Uttar Pradesh has become a topic of discussion. It is being told that some videos and photos of the professor were viral on social media platforms and it was alleged that he has been sent on long leave because the video was shot in her chamber. However, the female professor has termed the video as fake and accused it of an attempt to defame her.

The victim woman professor teaches Indian fiction at AMU's Women's College. She has said that every year I am working hard to give good education to more than 500 students. Videos and photos uploaded on media are indecent and abusive. This is a criminal act. The professor's post was viral on social media from the Twitter handle of journalist Vinay in which it was said that the female professor has been sent on long leave and the rationale behind it is that the pornographic video of the professor is going viral.

When the student leaders of AMU got information on this matter, the woman professor did not make any sense from the video. According to student leader Farhan Zubairi, the professor has been deliberately linked to defame her under some conspiracy.

The lady professor has complained about this case to the Proctor's office of AMU. From the same Proctor's office, a complaint has been given against the accused in the Police Station Civil Lines in which the female professor has demanded strict legal action by registering an FIR so that in the future no one can try to assassinate the character of any woman.

However, the woman's post has been removed from social media and the name of the Twitter handle has also been changed. On the other hand, Police Station Civil Line in-charge Ravindra Dubey said that complaint has been received and action is being taken based on the investigation.

As per Farhan Zuberi’s tweet, who is a Cabinet Minister of AMUSU,” It is easiest in the country to defame any Muslim or the honor of any girl, a conspiracy was hatched to defame one of our professors from the Twitter account named Vinay. After giving the complaint, that account deleted the tweet and also changed the name of the account”.

UP elections are around the corner and once again controversies are emerging. Controversy has been going on for a long time over the removal of the picture of Mohammad Ali Jinnah from the students' hall of Aligarh Muslim University. This is in the headlines again. The reason is the statement of Bharatiya Janata Party MP Satish Gautam. Aligarh Muslim University (AMU) student leader Farhan Zubairi said that the picture of Mohammad Ali Jinnah should be removed from Parliament, then we will remove the picture from here (AMU) too.

Farhan said that a law should be passed in Parliament and Jinnah's picture should be removed. What can anyone object to this, but the question is that when the picture is not being removed from Mumbai, Parliament, then why there is a hue and cry for it. This picture is from before independence when Jinnah was a part of India. Will our history be forgotten, whatever has been in history will be remembered.

Jinnah's picture is an excuse, as the assembly elections in Uttar Pradesh are approaching. So BJP has to bring Hindu-Muslim issues by any means. They do not have any issues left, so they return to the university itself. Farhan made remarks on the MP and said that instead of knowing the condition of the hungry family, he wants to make AMU a den of politics. Therefore, he is completely against the statement of the MP.