In a major development, the North East Team Of Nand Nagri Police has arrested Two Snatchers and recovered a button-actuated knife, a stolen Splendour motorcycle, and mobile phones. 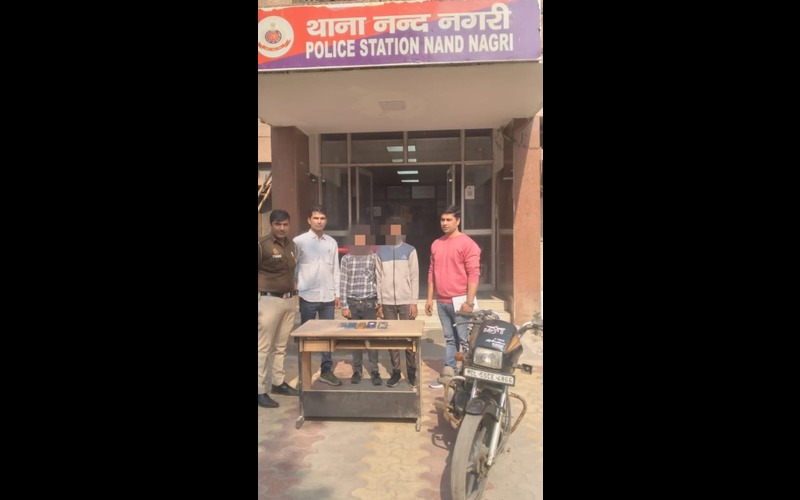 New Delhi: In a major development, the North East Team Of Nand Nagri Police have arrested two Snatchers and recovered a button-actuated knife, a stolen Splendour motorcycle, and several robbed mobile phones. The accused have been identified as Sourab (25) and Karan (27), both having previous criminal involvements.

Two persons playing on a motorcycle were signaled to stop for checking but sensing the police team, they sped up in a bid to escape. The alert police team chased and nabbed them after running 40-50 steps.”

He further stated, “The rider was identified as Sourabh, and the pillion was identified as Karan. On a cursory search, one button-actuated knife was recovered from the possession of Sourabh and 5 mobile phones were recovered from the possession of Karan for which he couldn’t reply satisfactorily. On asking about the ownership related documents of the motorcycle, they tried to bluff the police team.

On investigation, motorcycle No. DL-5SCE-4866 which they were riding, was found stolen from the area of PS Jyoti Nagar.

Accordingly, a case was filed and an investigation was taken up. On sustained interrogation, they disclosed that the recovered mobile phones are stolen property. Further, their involvement in multiple criminal cases also surfaced. As per the Police, further investigation in the case is in progress.