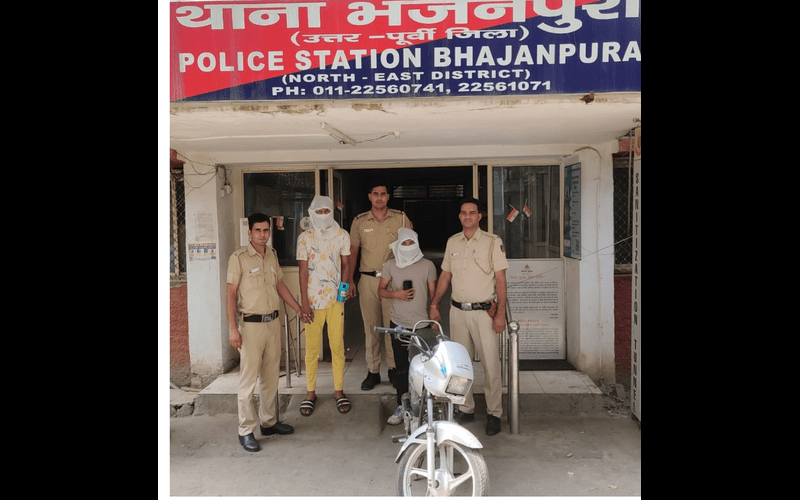 In a major development, the North East Team of Bhajanpura Police arrested two snatchers and recovered stolen mobile phones and motorcycles. The accused have been identified as Rinku (19), who’s had previous criminal involvements, and Jatin (19).In a wonderful initiative by the North East District, the efforts to catch the miscreants have been commendable

According to Sanjay Kumar Sain, Dy. Commissioner of Police, North-East District, New Delhi, “On the 5th of May, during the course of investigation of a previous case, which was registered on the 4th of March, PS Bhajanpura, along with a Police Team comprising SI Sagar, HC Anil, and Const. Arun, under the supervision of SHO/Bhajanpura, reached BS Park. Over there, the Police noticed two suspected persons sitting on a motorcycle. As the team approached the motorcyclist, the duo, in a bid to escape, ran away, leaving behind their motorcycle No. DL-5SCA-8890. However, they were chased and pinned down by the alert police team within a brief chase on foot.

He further added, “On cursory search, one mobile phone was recovered from each of them. On interrogation, they could not tell the source of the mobile and revealed that both mobile phones had been snatched. Their identity was established as Rinku (19) and Jatin (19). On sustained interrogation, they confessed to their crime and disclosed their involvements in other cases also. Sincere efforts are on to link the other mobile phone with the concerned case and to establish the ownership of the motorcycle is on. As per the Police, further investigation into the case is in progress. The FIR has been lodged as e-FIR No. 000633/22 dated 04/05/2022 u/s 379/356/34 IPC & 102 Cr.PC, PS Bhajanpura, Delhi.