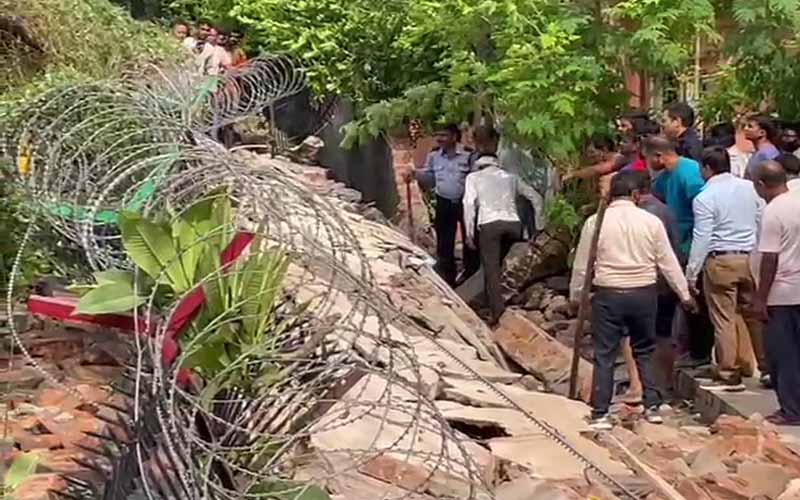 A wall collapsed in Sector-21 of Noida. Many people are feared trapped after the wall collapsed. Police is working to rescue the trapped people. This wall collapsed while cleaning the drain in Jalvayu Vihar. A total of 12 laborers were working there at that time. The local people present informed the police about the accident. As soon as the information was received, all the top officials including the police commissioner and DM reached the spot. Fire, police and authority officials are present on the spot. Debris removal work is underway. Chief Minister Yogi Adityanath has expressed grief over the accident.

Uttar Pradesh Chief Minister Yogi Adityanath has condoled the loss of life in the incident of wall collapse in Noida Sector 21. He has directed the senior officers to reach the spot immediately and continue the rescue operation on a war footing.

Noida District Magistrate Suhas Lalinakere Yathiraj said that the Noida Authority had awarded the contract for the repair works of the drain adjacent to Jal Vayu Vihar in Sector 21. When the workers were taking out bricks, the adjoining wall collapsed on them. A detailed investigation will be done. So far 2 people have been reported dead in the district hospital and 2 people in Kailash Hospital. It is being confirmed. Rescue operation is going on at the spot.

Air Vice Marshal Pradeep Kumar, president of Jalvayu Vihar RWA, said that the accident occurred due to the collapse of the sector wall adjoining the drain towards gate number one. He told that about four years ago the sector wall was built apart from the drain wall. Three or four days ago some people took out the soil from the banks of the drain, which weakened the foundation of the boundary wall of the sector.