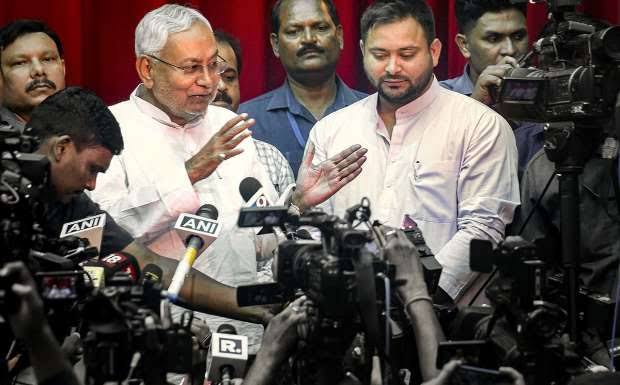 The cabinet expansion of Nitish government in Bihar is to be held on Tuesday. At present, Nitish Kumar has taken oath as CM and Tejashwi Yadav as Deputy CM in the Grand Alliance government. But in the cabinet expansion to be held today, 31 leaders will be sworn in as ministers. The government has submitted the list of names of ministers to the Raj Bhavan. The new ministers will be administered the oath at 11:30 am today at Rajendra Mandapam of the Raj Bhavan. According to the number of MLAs, the maximum number of ministers will be from RJD.

It is known that the expansion of the cabinet is to be held at 11:30 am today. The swearing-in ceremony will be held at Rajendra Mandapam Hall of Raj Bhavan. According to sources, Sudhakar Singh, son of RJD's state president Jagdanand Singh, can take oath as the minister. In Nitish's new cabinet, 31 MLAs will join today by taking oath as ministers. Let us inform that at present, Nitish Kumar has already taken oath of the post of Chief Minister and Tejashwi Yadav as Deputy Chief Minister. According to the number of MLAs, excluding the Chief Minister, there can be a maximum of 35 ministers in the Bihar cabinet.

Left parties have a total of 19 MLAs in the Bihar Legislative Assembly. If we believe the information received from the sources, today CPI will not join the ML government, CPI and CPM will join the government. Awadh Bihari Chaudhary may be the speaker from RJD. In Nitish's new cabinet, 16 RJD, 11 JDU, 2 Congress, one HAM and one independent MLAs will be included. These MLAs of JDU quota have been invited by Chief Minister Nitish Kumar to take oath as ministers.