Two rival party men are seen manhandling a Samajwadi party worker by tugging at her saree. 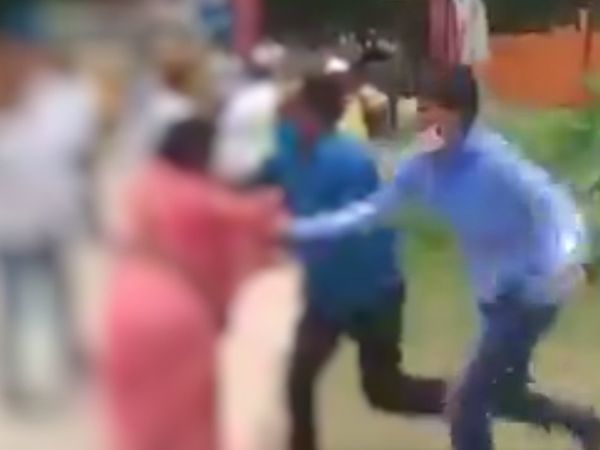 A disturbing video from Uttar Pradesh surfaced on the internet on Thursday where two men from a rival party are seen manhandling a Samajwadi party worker by tugging at her saree. The shameful incident took place in Lakhimpur district (near Lucknow) during the filing of nomination ahead of local polls.

The woman, a proposer for Samajwadi Party candidate in block Panchayat polls was trying to enter the nomination center when she was attacked. According to the Police, the two men were trying to stop her from filing the nominations in time by snatching her papers in order to increase the chances of their candidate.

In similar events, violence has been reported from more than a dozen places in UP as nominations are filled for voting for nearly 825 block pramukhs or local panchayat heads.

Congress leader Priyanka Gandhi Vadra also shared the video targeting the PM and the CM. Her tweet (in Hindi) read, "please also congratulate yourselves for the number of times your workers in UP have resorted to bombs, stones and bullets, snatched nomination papers, beaten up journalists and misbehaved with women. Law and order is blindfolded and democracy is being disrobed," she said referencing the Mahabharata.

UP Police officer Prashant Kumar said that although security arrangements had been stepped up for filing nominations, clashes were inevitable in 14 areas. However, he said that the police has reports of violence and papers being snatched and tough action will be taken against those involved.

In preparation of 2022 Assembly elections, stakes are high in UP and local polls have seen aggressive campaigning along with violence. Recently, the BJP won 67 of 75 seats in Zila Panchayat elections. The Samajwadi Party won only five seats. The Rashtriya Lok Dal, Jansatta Dal and an independent candidate won a seat each.