Nayanthara looked like Apsara in red saree, Vignesh wrote a loving note for his wife

Nayantara wore a red sari, full sleeves blouse and heavy jewelry on the occasion of the wedding. At the same time, Vignesh chose a traditional silk kurta and dhoti for the occasion. 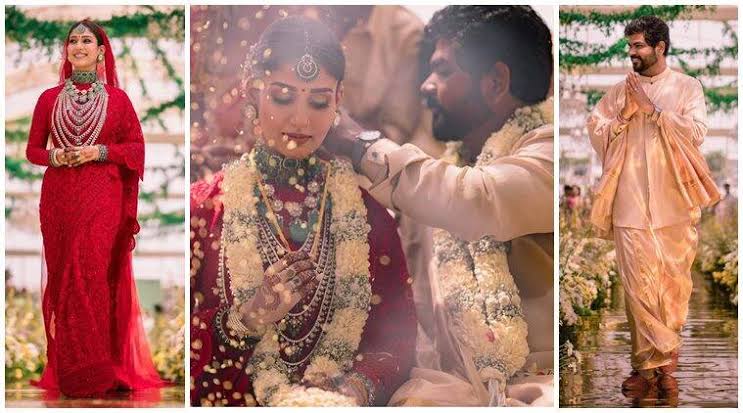 South Indian cinema's well-known actress Nayanthara tied the knot with director Vignesh Shivan on 9 June. After the completion of the wedding rituals, Nayantara has shared pictures on Instagram, in which she looks very beautiful.

In the pictures, Nayanthara and Vignesh Shivan are garlanding each other. Vignesh is seen kissing his wife after the wedding ceremony is over. The wedding rituals took place in Mahabalipuram on Thursday morning. Nayantara and Vignesh were in a relationship for seven years.

Nayanthara has worked in all the languages ​​of South Malayalam, Tamil, Telugu and Kannada. His work has become famous mainly in Tamil and Telugu cinema. Nayanthara is now making her Hindi debut with the Pan-India film Jawan opposite Shah Rukh Khan. Directed by Atlee, the film will also be released in Tamil, Telugu, Malayalam and Kannada languages.

Nayanthara and Vignesh came into the relationship with the 2015 film Naanum Rowdy Dhaan. Both have also started a production house named Rowdy Pictures. At the same time, Vignesh is mainly a producer, director and writer of Tamil cinema. Vignesh started his career as a director in 2012 with the film Poda Podi.