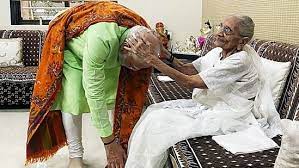 Prime Minister Narendra Modi reached Ahmedabad on December 4, a day before the second phase of Gujarat Assembly elections. After landing from Ahmedabad airport, PM Modi went straight to Gandhinagar to meet his mother Heeraben Modi at her residence and took her blessings by touching her feet. Modi spent around 45 minutes at his mother's place. After which he left from there. PM Modi will spend the night at Raj Bhavan. The second phase of polling is to be held in Gujarat tomorrow i.e. on 5th December. The Prime Minister will exercise his franchise on Monday morning at a polling station set up in a school in Ranip area of ​​Ahmedabad city. Union Home Minister and BJP MP from Gandhinagar Amit Shah will cast his vote at a center set up at a municipal corporation office in Naranpura, Ahmedabad. Modi is a registered voter of Ranip constituency and had cast his vote here in the 2019 Lok Sabha elections as well as in other elections earlier. This polling station comes under Sabarmati assembly of Ahmedabad city.

After meeting his mother, Modi went to the BJP headquarters in Gujarat where he met leaders and workers. There he was welcomed by Amit Shah, State BJP President CR Patil and other senior leaders. Earlier, Modi had reached his mother's residence to meet her in the month of August. At that time he had reached Gujarat to inaugurate the Atal bridge. His younger brother Pankaj Modi had said that PM Modi met his mother late in the evening and spent about half an hour with her after attending a Khadi festival event in Ahmedabad.

Prime Minister Narendra Modi campaigned extensively for BJP candidates on December 1 and 2, including two roadshows in Ahmedabad. PM Modi did a total of 31 rallies during the Gujarat election campaign. On Saturday, BJP organized several roadshows and election rallies with its star campaigners. On behalf of the BJP, Uttar Pradesh Chief Minister Yogi Adityanath on Saturday held election rallies in the cities of Dholka, Mahudha and Khambhat, while Union Minister Smriti Irani held roadshows in the cities of Modasa and Siddhpur in north Gujarat.