Along with this, the Nagpur Police has also started an investigation into the threat. According to the police, an unidentified person has threatened to blow up the RSS headquarters. Police are on the lookout to nab the person who made the threatening phone call. 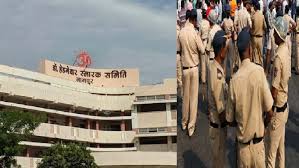 Regarding the threat of blowing up the RSS headquarters, Nagpur Zone III DCP Gorakh Bhamre said that the police control room received a call at 1 pm on Saturday, in which a person threatened to blow up the RSS headquarters in Mahal area with a bomb. As soon as the threat was received, the police swung into action and immediately the Bomb Detection and Disposal Squad was called and the headquarters premises of the Sangh were checked. However, nothing suspicious was found in the investigation. The DCP said that precautionary patrolling has been increased.

Nagpur Police Commissioner Amitesh Kumar said that the police had received an objectionable call on the threat call related to the RSS headquarters. We are probing the matter. Necessary action will be taken in the matter. Security of RSS headquarters is our responsibility, police is always deployed there. No inappropriate incident can happen, if it is going to happen, we will stop it.