Lwin had worn an ethnic costume of Chin people who are from the north-western Myanmar, where violence has recently erupted between the army and anti-junta militia forces. 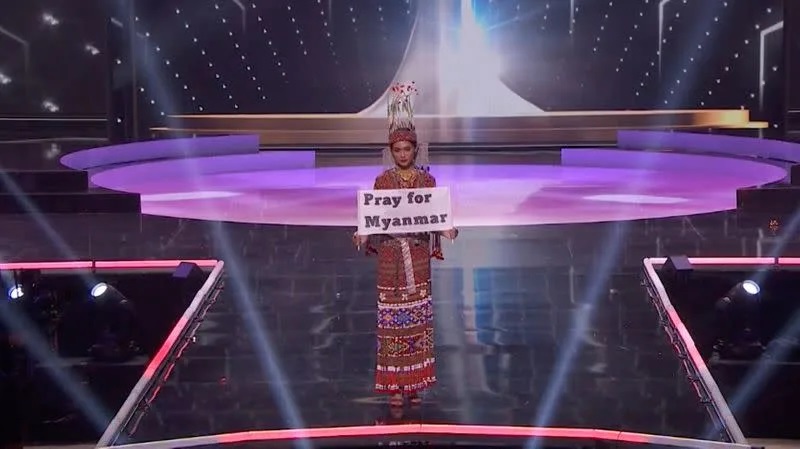 Thuzar Wint Lwin, a Miss Universe contestant from Myanmar, caught eyeballs at the pageant as she utilised the Miss Universe stage to call on the world to speak out against the military junta, the armed forces of the outfit have killed hundreds of dissidents since seizing power in a February 1st following a military coup.

Lwin asked for people to stand against the military junta and speak on the situation in Myanmar. Lwin has been vocal about her dissent against the coup since it happened in February.

Lwin is one of many Myanmar celebrities, social media influencers, and athletes who have spoken out against the coup that deposed and imprisoned elected leader Aung San Suu Kyi.

She said, "Our people are dying and being shot by the military every day," in a video message for the Miss Universe contest, where she was competing in the finals at Florida's Seminole Hard Rock Hotel & Casino.

Thuzar Wint Lwin did not advance to the Miss Universe final round, however she won the award for Best National Costume, where she walked the stage carrying the placard saying- “Pray for Myanmar”.

Lwin had worn an ethnic costume of Chin people who are from the north-western Myanmar, where violence has recently erupted between the army and anti-junta militia forces.

According to the activist organisation, Assistance Association for Political Prisoners, government forces have killed nearly 790 people following the coup. More than 5,000 people have been detained, with around 4,000 who remain held, including many celebrities.

In the early hours of the February 1stmorning, state councillor Aung San Suu Kyi and other colleagues from the National League of Democracy were arrested. A military coup seemed to be an abrupt chain of events for a country that had just re-elected Suu Kyi's party with an overwhelming majority.

The military junta declared the election as fraudulent and ousted the NLD leader, following which there have been persistent clashes between the junta and the Myanmar people who refuse to accept the junta rule.