Mumbai Rains: Intermittent rain in Mumbai since morning, red alert for the next 48 hours

The intensity of rain has started decreasing from Thursday afternoon after heavy rain in Mumbai and adjoining areas since Monday. 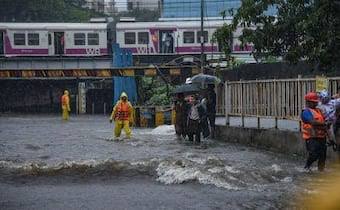 The Meteorological Department has issued a red alert of rain for the next 48 hours in Mumbai and its surrounding areas. At the same time, a hightide alert has also been issued at 7.15 pm today. During this, 11 feet high waves can rise in the sea. People have been advised to stay away from the sea. According to the forecast of the Meteorological Department, there is a possibility of heavy to very heavy rainfall in and around Mumbai. During this time, the wind speed is expected to reach 40 to 50 kmph.

The people of Mumbai got some respite from the rains on Friday after four consecutive days of heavy rain and normal life was back on track but once again the red alert issued by the Meteorological Department has increased the concerns of the people.

Mumbai and its neighboring cities, considered the financial capital of the country, remained cloudy with light rain on Friday. South Mumbai, its eastern suburbs and western suburbs recorded an average rainfall of 28.08 mm, 32.64 mm and 51.96 mm respectively during the 24-hour period till 8 am on Friday. Due to the red alert, five teams of NDRF were deployed in Mumbai and BMC teams were also prepared to face any eventuality.