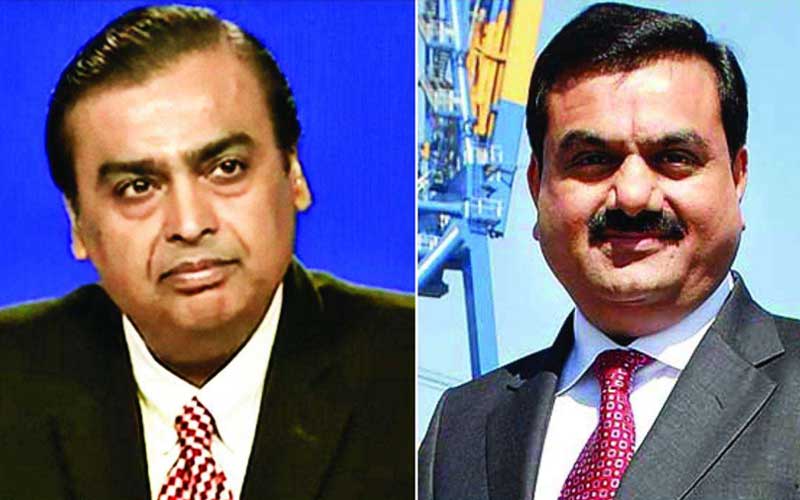 Two of PM Narendra Modi’s favourite Industrialists, who have avoided to trample on each other’s toes yet, are most likely to see a faceoff soon.

With an eye on domination of Indian Solar Energy, the sector may witness this event after Reliance Industries big push into the arena of renewable energy.

Industry Experts feel that Reliance Industries’ (owned by Mukesh Ambani) entry into the sector could start a competition between the two business magnates pushing the Solar Energy tariffs to go further southwards. As it is India’s Solar tariffs are amongst the lowest in the world.

It is a stated ambition of Prime Minister Narendra Modi’s of ramping up India’s green energy output to 450 GW (gigawatts) by 2030. This tall ambition would mean raising the capacity by more than four fold in the timeframe. Both the industrialists are vying to help reach the goal.

If this face-off happens, it will be a high profile all stakes competition.

Ambani, 64, who has focussed on petrochemicals and textiles family business and created a fortune, ramped it up with retail and telecom ventures. Adani, 59, on the other hand has concentrated on electricity generation, transmission and distribution and the operation of ports and airports.

Ambani has announced recently on his goal of creating a 100 GW green energy capacity over the next nine years. His announcement included his willingness to allocate $10 billion by 2024 for building solar manufacturing units, a battery factory for energy storage, a fuel cell factory, and a unit to produce green hydrogen.

Many analysts feel that there is sufficient space for multiple companies to grow in this sector, given the ambitious goals India has set itself up for, but this also might create a situation where the tariffs could fall further due to competition between companies and their aggressive bidding to win projects.

Experts point out that Solar tariffs in India is amongst the lowest in the world. It has just slipped downward of Rs. 2 per kilowatt hour in the auctions recently conducted in Gujarat. They are predicting that these rates will further slip to maybe Rs. 1 by 2030.

Reliance has always been a disruptor in any business it chooses to focus on. With cheap smartphones and much cheaper data plans in the Telecom sector, Reliance made life for Vodafone Idea and Bharti Airtel difficult and in turn became the leader in the sector.

Both these Industrialists’ traditional businesses are based on fossil fuels. Ambani has interests in Oil and Adani is the country’s largest Coal trader and the largest private sector operator of coal-fired thermal stations.

India is the world's third biggest emitter of greenhouse gases. Very soon these Coal-based power generation units could drop dramatically as major players would want green energy according to analysts. They feel that India's coal generation share will rest at 50% by 2030 from the present over 70%. Not only that, they also feel that building new coal thermal power plants in India might cost over $60/MWh by 2030, which would be around 25% higher than that of setting up solar parks.

Adani, right now is not in a threatened situation and these changes which the experts are predicting might not touch him in the near future. But he has not made any new announced plans to build new thermal power plants. And also because both these groups are looking to improve their clean energy credentials as investors pay more attention to environmental impact of their businesses and make decisions based on ESG ratings as per the analysts. Currently, Adani Green Energy dominates India's renewable energy space. Its shares have in the last year jumped 156%.

On the other hand, Ambani wants Reliance to become net carbon zero by 2035, much ahead of 2050 target set for global oil majors such as Royal Dutch Shell and BP.

In a move to attract ESG funds from across the globe, Reliance will try to emerge as the most credible renewables player and lowering its ESG sores, in the country in the next two years.

Experts are predicting that if both these companies are to achieve their targets, Reliance's solar energy generation capacity of 100 GW, will trounce Adani's by a 2:1 factor, and these two companies would together account for a third of all of India's 2030 target.

Just like Reliance, Adani too is looking for better sustainability scores, as it faces criticism for developing an Australian coal mine being allegedly doing business with entities linked to the Myanmar armed forces. Adani has regularly denied links with Myanmar military, and said it could write down an investment in a port terminal in Myanmar. Similarly they say that the Australian coal mine created jobs for locals, and was critical to ensuring energy security.

This makes Adani’s ventures to go green increasingly and he should be seen walking the talk, Financial markets are not agnostic to ESG. And this might bring him what he wants.