Chennai Super King gets into final 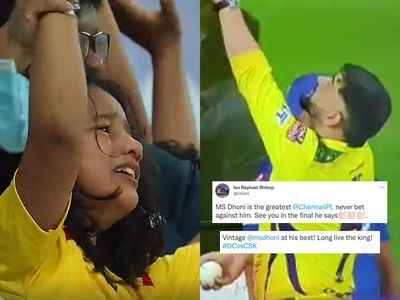 MS Dhoni gifted a signed ball to a young supporter of Chennai Super Kings after the team in yellow moved into the Indian Premier League 2021 final at the Dubai International Stadium on Sunday. CSK defeated Delhi Capitals by four wickets in Qualifier 1 as Dhoni returned to form with a much-needed 18 off six balls.

On-fields when Dhoni was pulling off a sensational chase in the last over, the camera captured a beautiful moment in which many CSK fans were not able to stop their tears. When the match got over, Dhoni was seen signing the match ball and throwing it to the girl into the stands making her dream come true. The fans were happy after seeing this special moment on-screen.

The moment when MS Dhoni gifted the ball to the young girl. What a lovely sight, great gesture by MS. pic.twitter.com/vPL6xaYZdk

In the last two overs, CSK needed 24 runs but Avesh Khan dismissed set batsman Ruturaj Gaikwad on the first ball. Dhoni hit a six and match came down to 12 needed off the last six balls.