Mortal remains of a 30-year-old Kerala woman killed in Israel, arrive in India

V Muraleedharan, the minister of state for external affairs, and Rony Yedidia Clein, the Israeli deputy envoy, paid their respects to the deceased in the national capital. 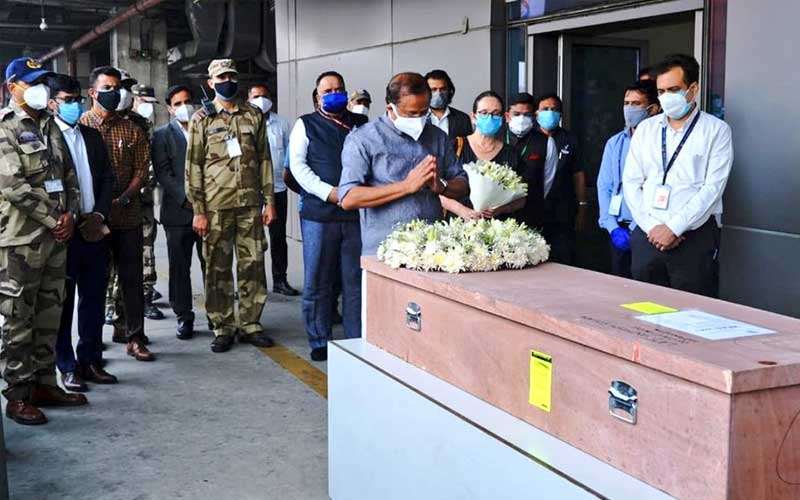 On Saturday morning, the remnants of Soumya Santhosh, a 30-year-old Kerala woman who lost her life in the rocket attack on the Israeli city of Ashkelon, landed in New Delhi. V Muraleedharan, the minister of state for external affairs, and Rony Yedidia Clein, the Israeli deputy envoy, paid their respects to the deceased in the national capital.

“With a heavy heart, received the mortal remains of Ms Soumya Santhosh in Delhi and paid my last respects. The Israel Embassy's CDA, @RonyYedidia, has also joined. I feel sympathy with Ms Soumya's family's anguish and misery." On Saturday, Muraleedharan tweeted, "More strength to them."

Ms Santhosh's mortal remains were personally received by the minister of state in Delhi, he confirmed. “Ms Soumya Santhosh's mortal remains are being repatriated today from Israel to Kerala via Delhi, after being killed in rocket attacks from Gaza. They'll reach her hometown the next day. In Delhi, I will personally receive the remains. On Friday, he tweeted, "May her soul rest in peace."

With a heavy heart, received the mortal remains of Ms. Soumya Santhosh in Delhi and paid my last respects. CDA of Israel Embassy @RonyYedidia also joined.

I empathise with the pain and sufferings of the family of Ms. Soumya. More strength to them. pic.twitter.com/97bvOziCpG

Later that night, the Indian embassy in Israel announced that the plane carrying her mortal remains had taken off from Israel for New Delhi.

Soumya Santhosh was employed as a caregiver for an elderly woman in the Israeli city of Ashkelon, near the Gaza Strip as per a report by the news agency. Soumya's family said that she spent seven years in Israel while her husband and nine-year-old son remained in Kerala.

On Thursday, Israel's deputy envoy Rony Yedidia Clein stated that the deceased's mortal remains would arrive in India by Saturday. “We've made contact with the family. When this happened, she was talking to her husband, and I can only imagine how terrifying it must have been for him. I can only sympathise with what he must be doing" she said.

Further, Kerala chief minister Pinarayi Vijayan conveyed his condolences to Ms Santhosh's family. “We are in contact with the Indian Embassy in Israel to ensure that the mortal remains of Soumya Santhosh, who was killed in Israel, are returned to Kerala as soon as possible and handed over to her relatives." On Wednesday, Vijayan expressed his heartfelt condolences to Soumya's family and friends.