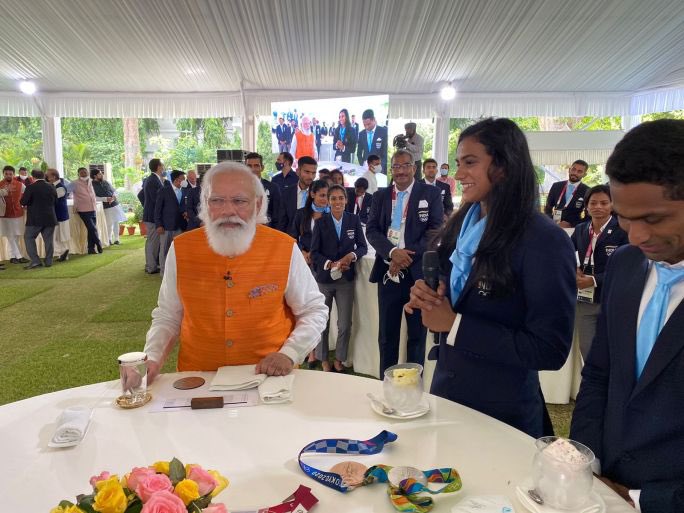 New Delhi: On Monday, Prime Minister, Shri Narendra Modi hosted the Indian Contingent of the Tokyo Olympics 2020 over a ‘Tea Party’  at 7, Lok Kalyan Marg, his Official residence. As we know, Prime Minister Modi had promised all the Tokyo-bound athletes that he will invite them after the Olympics. all the athletes and officials are staying at Hotel Ashoka in New Delhi are just one km away from PM's residence, in the morning they took Luxury buses to reach PM house. As promised PM Modi offered ice cream to double Olympic medalist Badminton star, PV Sindhu. We have the pictures, Sindu is having ice cream on the same table where PM Modi is also standing and talking to her and other athletes, Union Minister for Youth Affairs and Sports Anurag Singh Thakur was also present in the Tea Party.

PM had even asked Badminton star PV Sindhu, during an interaction before Tokyo Olympics, that if, she is eating Ice cream or not? "I have to avoid many things, so, I eat Ice cream very rarely," she replied. On this, PM had promised her, "when you come back with the medal, I will fetch you the ice cream." Today PM has fulfilled his promise. At today's party, star attraction was Olympic Gold medal winner Javelin thrower, Neeraj Chopra. 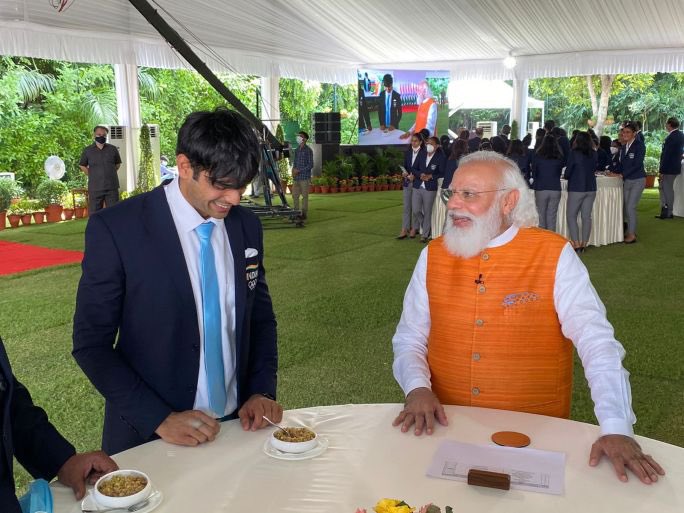 On Sunday morning, all the Olympic athletes were present at Red Fort to celebrate 75th Independence Day. Prime Minister has invited all the athletes for the Independence Day celebration at Red Fort. In the evening all the athletes attended the Cash prize-giving function hosted by Indian Olympic Association. Union Minister of Youth Affairs and Sports Shri Anurag Singh Thakur was present at this function and he told the athletes that. " I know you are having a very busy schedule. Today in the morning you were there at Red Fort and in the evening you are attending this function and tomorrow (Monday) morning at 8 am you have been invited by the Prime Minister for the Tea party. Modi ji knows small things about you, he knows who likes ice cream, etc." 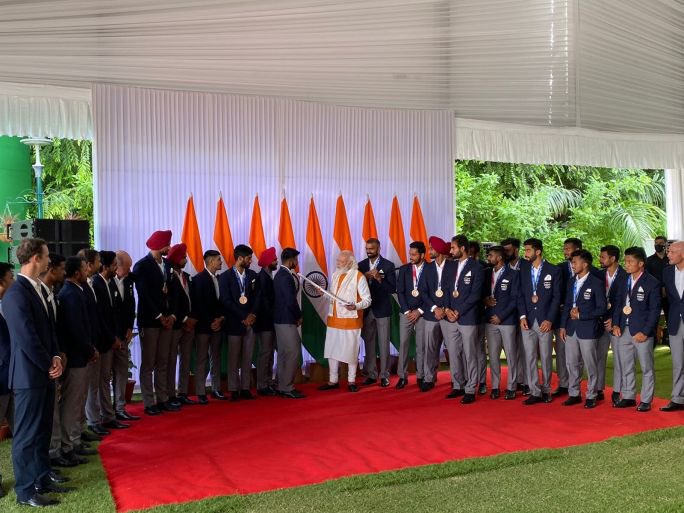