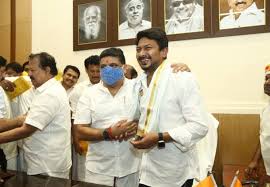 Accompanied by senior ministers Duraimurugan and KN Nehru, Udhayanidhi formally took charge at the secretariat in the Fort St George complex. All other ministers and top officials including Anbil Mahesh, E V Velu and V Senthil Balaji were present on the occasion. DMK's ally Congress attended the swearing-in ceremony while the main opposition AIADMK boycotted the ceremony alleging dynastic politics. Ravi congratulated Udhayanidhi after he was administered the oath. Udhayanidhi has been given the responsibility of youth welfare, sports development, SPI department and poverty alleviation programme. Earlier the Department of Youth Welfare and Sports Development was with Shiva V Meyyanathan.