She will be a part of this journey. The PDP chief gave this information by tweeting. He also praised Rahul Gandhi for his 'indomitable courage'. 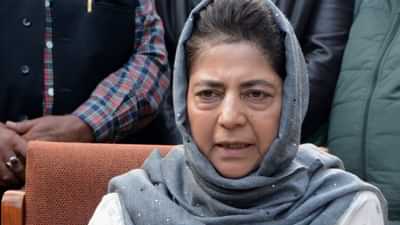 Peoples Democratic Party (PDP) Chief and former Chief Minister of Jammu and Kashmir Mehbooba Mufti praised Rahul Gandhi's 'Bharat Jodo Yatra'. He told on Tuesday that he has been invited to participate in this visit of the Congress. She will be a part of this journey. The PDP chief gave this information by tweeting. He also praised Rahul Gandhi for his 'indomitable courage'.

Mehbooba Mufti said in a tweet, "I have been formally invited to join the Bharat Jodo Yatra in Kashmir today. Salute to their indomitable courage. I believe that one who has the courage to challenge the forces of fascist It is my duty to stand up. Will join their march towards a better India." Meanwhile, the Jammu and Kashmir administration has said that 'Bharat Jodo Yatra' will be allowed in the union territory provided it does not violate the law.

Significantly, the 'Bharat Jodo Yatra' under the leadership of Rahul Gandhi will reach Uttar Pradesh on January 03 after a rest of about a week and then pass through some areas of West Uttar Pradesh for three days and enter Panipat in Haryana on January 06.. According to party sources, the yatra will enter Punjab on January 12, from where it will then proceed to Jammu and Kashmir.