Match between ManU and Liverpool stopped, after United fans protest on the pitch

Since the Glazers took ownership of the club in 2005, fans have been cynical of their motivations, claiming they are influenced only by money and the ability to profit from the club's commercial influence. 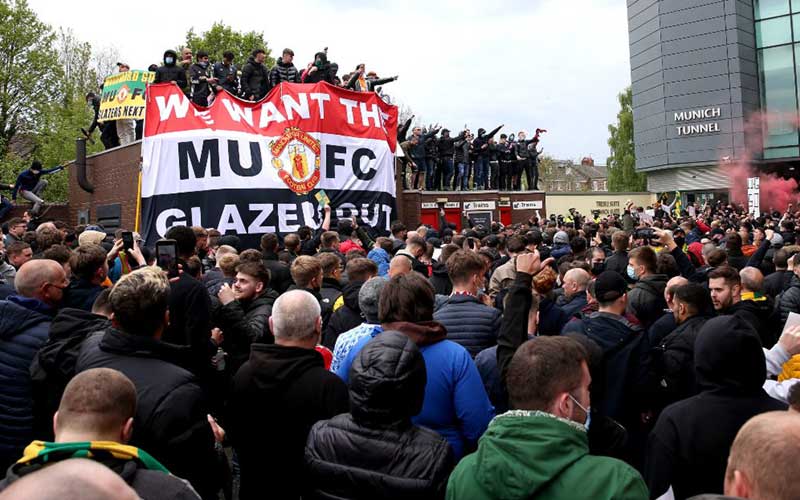 Manchester United supporters descended on Old Trafford prior to Sunday's Premier League match against Liverpool in a show of protest against the club's American owners, the Glazer family for their involvement in the unsuccessful bid to get Manchester United into the European Super League.

Fans protested with flags and flares at Old Trafford at 1 p.m. local time, according to British newspapers. They broke through the barriers to gain access to the field ahead of the domestic game against Liverpool, which is set to begin at 4.30 p.m. local time. After about ten minutes, they left the pitch.

Since the Glazers took ownership of the club in 2005, fans have been cynical of their motivations, claiming they are influenced only by money and the ability to profit from the club's commercial influence.

Though post-Super League demonstrations have been mostly peaceful, United's failed breakaway efforts merely added fuel to the fire and sparked a revolt, leading to the cancellation of the league's biggest match because it created a "dangerous situation that should have no place in football," according to the Premier League.

Outside the stadium, police on horseback evacuated chanting supporters, while glass bottles were being tossed in brief clashes. Many fans returned to a major road nearby the club, where police formed a line to prevent them from doing so.

United owner Joel Glazer, who was elected vice-chairman of the now defunct European Super League before the decision was made to drop the league after massive outrage by fans, apologised to supporters in an open letter after they withdrew from the project.

The football protestors also collected in front of the Lowry Hotel, where the Manchester United team usually stays prior to home games, to demonstrate their anger against the owners of the club and to exhibit their rejection of the apology extended to them by the club.

Manchester United released a statement, “Following discussion between the police, the Premier League, Trafford Council and the clubs, our match against Liverpool has been postponed due to safety and security considerations around the protest today.”