Fire near Mundka metro station, Delhi. The rescue operation continues with about 15 fire tenders at the spot, as per DCP Sameer Sharma 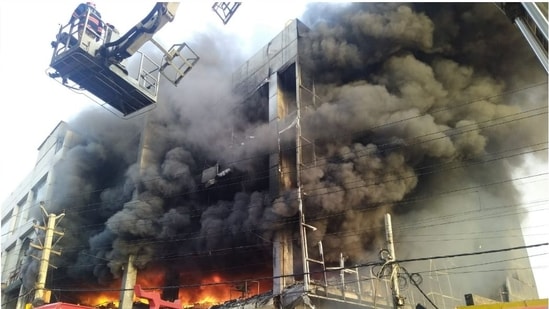 On Friday, near West Delhi's Mundka metro station, a huge fire emerged. The Fire department officials have stated that the actual numbers could go up as more were feared trapped, and rescue operation was underway. In the massive ablaze, 12 injured people have been currently admitted to the Sanjay Gandhi Hospital.

According to the Delhi Fire Director Atul Kumar Garg, 20 bodies were recovered in the fire at the 3-storeyed commercial building which broke out this evening near Delhi's Mundka metro station.

To save their life, some people jumped off their buildings and were rushed to the hospital immediately. President Ram Nath Kovind also condoled the fire incident at a building near Mundka Metro Station in Delhi, through a Tweet.