Ingenuity will conduct a series of tests in the days ahead, and if all systems are functioning properly, the rotorcraft will attempt its first flight no sooner than April 11th which will be a major milestone for NASA. 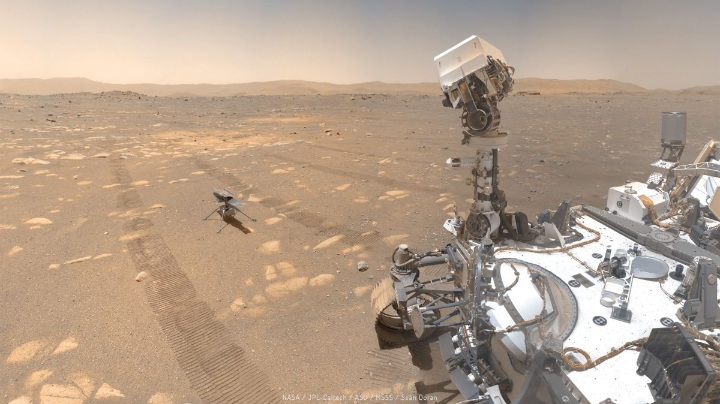 Before the first attempt at flight on the planet of Mars, NASA's Perseverance rover took a selfie on the surface of Mars, showing itself and the Ingenuity helicopter.

Perseverance was equipped with a 7-foot robotic arm on which is placed a wide-angle camera which allows the rover to take pictures of itself. The camera is called WATSON camera which is a Wide Angle Topographic Sensor for Operations and Engineering camera.

The camera is of an instrument placed in the Peseverance’s arm called the SHERLOC; Scanning Habitable Environment with Raman and Luminescence for Organics and Chemicals.

Two bots, one selfie. Greetings from Jezero Crater, where I’ve taken my first selfie of the mission. I’m also watching the #MarsHelicopter Ingenuity as it gets ready for its first flight in a few days. Daring mighty things indeed.

Perseverance's selfie with Ingenuity was stitched together from 62 individual pictures taken while the rover was looking at the helicopter, according to NASA.

Last week, the Ingenuity helicopter, which had been housed in the rover detached and spent its first night alone on Mars.

Ingenuity will conduct a series of tests in the days ahead, and if all systems are functioning properly, the rotorcraft will attempt its first flight no sooner than April 11th which will be a major milestone for NASA.

NASA informed, "The laws of physics may say it's near impossible to fly on Mars, but actually flying a heavier-than-air vehicle on the red planet is much harder than that."

The goal is for the helicopter to hover for 30 seconds at a height of 3 metres above the surface and then hover back for touchdown.

Since the atmosphere of Mars comprises of only 1% the density of Earth's atmosphere, it will be a challenge for the helicopter to achieve flight, even though it will be aided by gravity that is only a third as powerful as that of Earth.

“Once the team is ready to attempt the first flight, Perseverance will receive and relay to Ingenuity the final flight instructions from JPL mission controllers. Several factors will determine the precise time for the flight,” said NASA.