A day earlier, there was an ED raid at the house of his close aide Arpita Mukherjee as well. It was claimed to have received around Rs 20 crore in this raid. 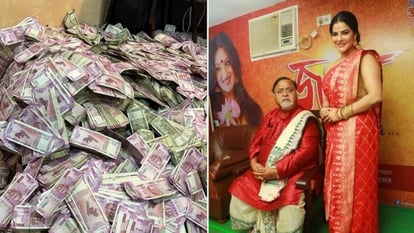 The Enforcement Directorate on Saturday arrested Partha Chatterjee, a minister in the West Bengal government. It has been told that he has been arrested in connection with the teacher recruitment scam.

It is worth mentioning that ED officials questioned Chatterjee overnight on Friday in connection with the alleged teacher recruitment scam. The agency officials started questioning Chatterjee at his residence at 8 am on Friday, after which he was arrested today. Chatterjee was the state education minister when the alleged scam happened. The Enforcement Directorate is probing the money laundering aspect against those allegedly involved in the scam.

According to the information, the ED also raided the house of Arpita Mukherjee, a close aide of Minister Partha Chatterjee in the West Bengal government. According to reports, the ED has recovered around Rs 20 crore in cash during this period. In the picture of this action that has come to the fore, a huge mountain of Rs 500 and Rs 2000 notes is being seen. According to reports, apart from Arpita, the ED has raided many other places. Names like Minister Partha Chatterjee, Manik Bhattacharya, Alok Kumar Sarkar, Kalyan Moy Ganguly have been mentioned in this list.