On Monday, he sent a formal response to the letter, saying, "The show-cause notice appears mala fide, on behalf of officers who may have something personal against me, as none of my actions justifies this show-cause notice." 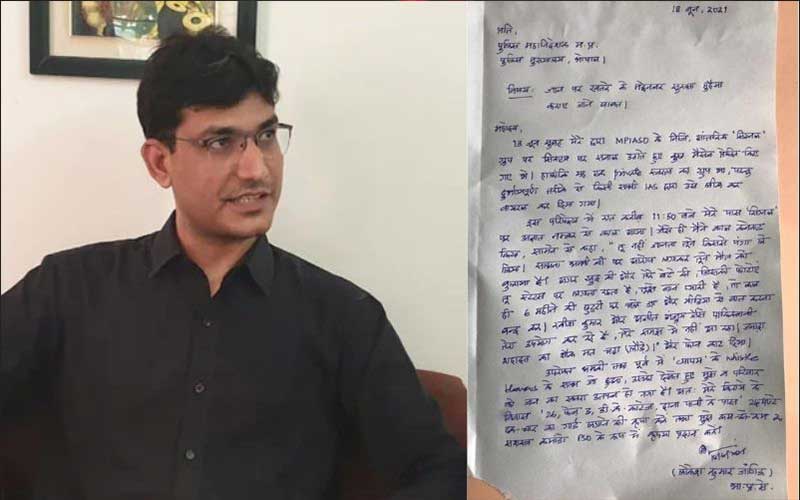 The controversy surrounding the transfer of IAS officer Lokesh Kumar Jangid and the subsequent leak of his alleged chat accusing a senior officer of corruption has taken a new turn, with the officer continuing to go on the offensive, calling the show cause notice served on him by the Madhya Pradesh government's general administration department (GAD) "mala fide."

On Monday, he sent a formal response to the letter, saying, "The show-cause notice appears mala fide, on behalf of officers who may have something personal against me, as none of my actions justifies this show-cause notice."

Further, he said that the unexplained delay in delivering the show-cause notice "raises concerns about mala fide involvement in the issue."

Reportedly, Jangid was charged on 16th June with "tapping and making public" a phone call with the GAD's senior secretary, Deepti Gaud Mukherjee, discussing his transfer from the job of Barwani additional district magistrate (ADM) to extra mission director of the Rajya Shiksha Kendra on 31st May.

Jangid's move was his eighth in 4.5 years in Madhya Pradesh, and afterwards, in a series of conversations on a social media chat group (of MP cadre IAS officials) that were leaked, the officer accused his senior in Barwani of corruption and of using influence with the chief minister to get him transferred. Jangid was slapped with a show-cause notice following the disclosure of the conversation and the ensuing uproar.

According to reports, Jangid forwarded his response addressed to the GAD's undersecretary (personnel) to the main secretary's official email ID on Monday. Jangid did not respond to requests for comment.

In response to this

The officer rejected the accusations in his comprehensive response, while expressing astonishment over the notice issued on him after "seven years of dedicated service without a blemish."

Jangid filed a point-by-point reply to the notice, which detailed accusations against him under rules 3(1) and 2(B) (x, xi) of the All India Services (Conduct) Rules, 1968 and was served on him on 16th June.

Rule 3(1) deals with preserving integrity and commitment to duty, as well as doing anything unfit for a member of the (all India) service.

The rule 2(B) (x, xi) requires officers to refrain from doing anything that is or may be contradictory to any law, rules, regulations, or established practises, as well as to preserve discipline in the execution of their responsibilities and to be liable to implement lawful orders duly conveyed.

The officer's basic assumption in defending himself is that he did not individually tap his superior officer's phone call nor make it public since he shared it solely with four other officers 'in good faith' through private social media messaging after the formal order of his transfer was made public.

Also, Jangid stated in his response that there was nothing in the aforementioned interaction with the senior officer (which was an oral message to him regarding his transfer from Barwani) that seemed to warrant protection or secrecy, and that the conversation was not personal nor secret. He clarified that he did not even question the cause for his transfer from the senior officer during the aforementioned conversation.

He maintained that the phone call was professional in nature and was not ‘tapped,' but was recorded ‘as standard procedure' to ensure better implementation of the senior officer's orders.

To make his claims, the officer cited further parts of the service conduct standards, the Right to Information (RTI) Act, and Supreme Court and various High Court judgments.

Lastly, the officer ended his response by stating that his actions were neither improper nor illegal. He stated that he was available for more inquiries and that he expected to be treated fairly and justly in accordance with the rule of law. He also stated that he will continue to put his best foot forward in the service of the nation and preserve constitutional ideals in accordance with the oath he took.