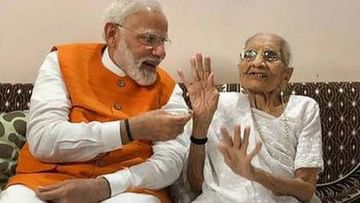 The health of the country's Prime Minister Narendra Modi's mother Heeraben suddenly deteriorated on Tuesday. He was admitted late night to UN Mehta Hospital in Ahmedabad, where a team of specialized doctors is monitoring him. On Wednesday, PM Narendra Modi also reached UN Mehta Hospital in Gujarat directly from Delhi to know about his mother's condition. It was told that the health of PM Modi's mother Heeraben is quite stable and is improving. Prime Minister Modi has returned to Delhi after getting information about his mother's health from the doctors.

Here, as soon as the news of the deteriorating health of the Prime Minister's mother is received, well-wishers are wishing her a speedy recovery. In the same sequence, in Varanasi also, rituals were performed at Assi Ghat of Kashi for the better health of Mother Heeraben. A video of this has also surfaced. In the ritual, pundits from Varanasi recited the Mahamrityunjaya Mantra to improve the health of PM Modi's mother Heeraben. In the Shivalaya at Assi Ghat, the pundits chanted the Mahamrityunjaya Mantra 11,000 times in the ritual.

The condition of Hiraben Modi, admitted to the UN Mehta Institute of Cardiology and Research Center in Ahmedabad, Gujarat, is said to be fine. The team of doctors also informed PM Modi about this. PM Modi stayed in the hospital for about 80 minutes, after which he left for Delhi. Let us inform that even before the arrival of PM Modi, Chief Minister of Gujarat Bhupendra Patel reached the hospital to know the condition of Heeraben.

It is noteworthy that 99-year-old Heeraben's health had deteriorated earlier in the year 2016, she was admitted to Gandhinagar Civil Hospital for treatment. At that time, instead of giving any kind of VIP treatment, he was admitted and treated like a normal patient in the general ward of the hospital.