The rookie Spaniard recorded the first-ever sub 1:23 lap around the Red Bull Ring. 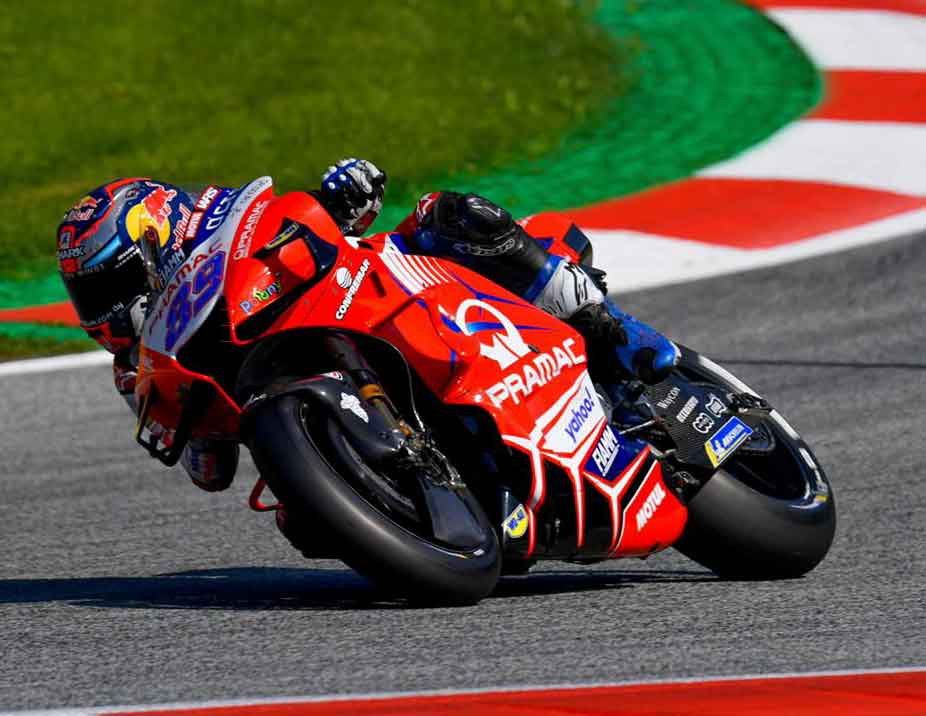 Styria: A dramatic qualifying at the MichelinGrand Prix of Styria ended with Jorge Martin carving out his own little piece of history as his 1:22.994 not only sealed his second pole of the year, but set a new lap record around the Red Bull Ring. Despite the Pramac Racing rider’s extraordinary time, he had less than a tenth to spare over Francesco Bagnaia (Ducati Lenovo Team) and Fabio Quartararo (Monster Energy Yamaha MotoGP).

Those three were the pacesetters of the session, with the conclusion of the first runs seeing them zero in on the all-time lap record as well as the very first sub 1:23 lap in Spielberg. Quartararo was the first to post a time attack, moving three tenths clear in provisional pole. Jack Miller (Ducati Lenovo Team) and Martin then announced their intentions to move to within a tenth of the Frenchman.

The Championship leader sat atop the leaderboard by the end of the first runs, but not for a want of trying from Martin, who looked set for pole and a potential lap record as he completed the third sector, but an error at turn 9 saw him run on to the green and his effort chalked off.

As riders filtered out of pitlane for their final runs, Bagnaia was already on track setting a time good enough to remove Quartararo from P1, despite losing time in the third sector, and set up a mouthwatering finale. Immediately that time came under threat as Martin went over a tenth up following the third sector, and there were no mistakes this time from the rookie as he took pole with the fastest ever lap around the Red Bull Ring. That was it for the two GP21s, and for Quartararo too as he saw his final flying lap chalked off, much to the delight of Martin who sealed his second pole of the season in thrilling fashion.

It proved a good day for Ducati with two of their machines on the front rwo, and two more on the second row with Miller and Johann Zarco (Pramac Racing) sandwiching Joan Mir (Team Suzuki Ecstar) in P5. The World Champion has been testing out a new ride height device and it looks to have paid immediate dividends as he secured one of his best qualification results of the season. It bodes well for the Mallorcan as he has only been on the second row five times before, three of which have seen him finish on a podium.

Maverick Viñales (Monster Energy Yamaha MotoGP) was one of the better performers through Free Practices 1, 2, 3 & 4, but his one lap pace seemed to desert him in qualifying and he will start from the back of the third row on Sunday. Ahead of the Spaniard are Aleix Espargaro (Aprilia Racing Team Gresini) and Marc Marquez (Repsol Honda Team), who fended up on the deck on his final time attack. Takaaki Nakagami (LCR Honda Idemitsu) leads Q1 graduates Alex Marquez (LCR Honda Castrol) and Miguel Oliveira in the fourth row.