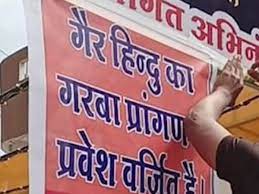 The Vishwa Hindu Parishad has put posters restricted the entry of non-Hindus in the pandals where Garba dance is performed hailing Goddess Durga during the ongoing Navratri festival in Madhya Pradesh’s Ratlam district to neglect the repeat of controversial incidents of last year.

The VHP told it has placed the posters stating the entry of non-Hindus is restricted across 56 pandals. Chandan Sharma, VHP’s Dharm Prachar Vibhag district secretary for Ratlam told the non-Hindu men to indulge in activities that are objectionable by entering the Garba pandals where dance is performed hailing Goddess Durga. He said the entry of non-Hindu youths has led to controversies at various places last year. By putting up such posters, non-Hindu people are being told not to enter the Garba and Durga pandals so that such incidents can be neglected.