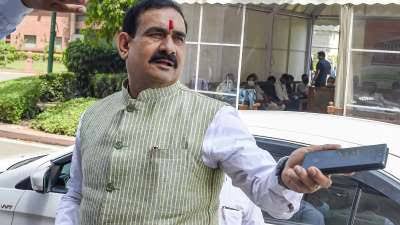 Madhya Pradesh Home Minister Dr Narottam Mishra has given such a statement which can create panic in the politics of the state. On the issue of Rashtriya Swayamsevak Sarsanghchalak Mohan Bhagwat going to the mosque, Mishra said that there has already been a clear thinking that there is no hatred for Muslims and terrorists are not well. State Home Minister said that we are not against any religion and religion. Mishra said in Jabalpur that Bhagwat's visit to the mosque shows that we have been worshipers of Rahim and Raskhan.

The minister said that our culture has been of Vasudhaiva Kutumbakam from the very beginning. Referring to the action taken against people associated with PFI of NIA and ATS in Indore and Ujjain of the state, Mishra said that 4 people have been arrested from Indore and Ujjain. It was a joint action of NIA and ATS. Abdul Karim, Abdul Sadiq, Muhammad Javed and Muhammad Jameel have been arrested in this action. Of these, 3 are from Indore and one from Ujjain. All of them are accused that they were involved in anti-national activities.

Multiple agencies led by the National Investigation Agency (NIA) on Thursday conducted simultaneous raids at 93 places in 15 states and arrested 106 leaders and activists of the Popular Front of India (PFI) for allegedly involved in funding terrorism in the country. . Giving information about this, the officials said that the maximum number of 22 PFI workers were arrested in Kerala. He said that among those arrested were its president O. M. Abdul Salam is also included. Officials termed it as the "biggest operation ever" against PFI.

Officials said the arrests have been made by the NIA, ED and the police of the respective states. He said that the states where raids have been conducted include Kerala, Tamil Nadu, Karnataka, Andhra Pradesh, Telangana, Uttar Pradesh, Rajasthan, Delhi, Assam, Madhya Pradesh, Maharashtra, Goa, West Bengal, Bihar and Manipur. Officials said the maximum number of arrests were made in Kerala (22). Apart from this, Maharashtra (20), Karnataka (20), Tamil Nadu (10), Assam (9), Uttar Pradesh (8), Andhra Pradesh (5), Madhya Pradesh (4), Puducherry (3), Delhi (3) and Arrests were made in Rajasthan (2).