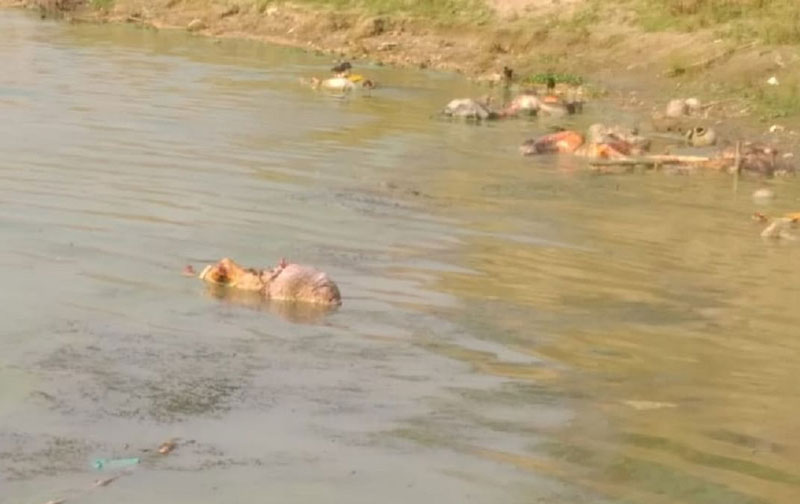 “This is how low the dignity of life has become in India," says Abhishek Manu Singhvi

After many images of several bodies seen floating in the Ganges in a Bihar district bordering UP, and suspected to have died of Corona Virus, started circulating in the social media Congress leader Abhishek Manu Singhvi called it the most “inhuman scene that ever emerged from this country”.

“This is how low the dignity of life has become in India,” he commented on Twitter.

During this second surge of the ongoing Covid pandemic, the district administration of Bihar’s Buxar found no less than 45 human bodies in various stages of decomposition, floating in the Ganges.

“Shocking scenes coming in frm #Bihar where several bodies have been dumped in holy #Ganga. This is how low the dignity of life has become in #India. most inhuman scene that ever emerged frm this country. Several govts at state & centre wld resign in other countries. #Shame,” posted Singhvi on Twitter. After the inundation of this news surfaced, district officials in the Chausa block of Buxar, which borders Uttar Pradesh, rushed to the spot

Even though he did not confirm that the bodies were of people who succumbed to Corona Virus complication however he was of the opinion that the bodies had originated from Uttar Pradesh’s various districts which are upstream on the Ganges.

“The bodies have started decomposing. But we are taking all precautions while ensuring that these are disposed of in a decent manner", he added.

The Officials statements are at conflict with what many eyewitnesses say. They claim that many bodies have been literally thrown into the river without any last rites by the deceased’s relatives. They claim that around 10 dead bodies are being thrown every day.

In situations where they are challenged or accosted, these very people show their inability to pay for the last rites and even assault those who request them to refrain from doing so.

Even though the Central government has been in a complete policy paralysis and have come a cropper on all actions related to mitigation of Corona complications, the Union Minister of Jal Shakti Gajendra Singh Shekhawat said, “The incident of corpses found floating in Ganga in Buxar region of Bihar is unfortunate. This is definitely a matter of investigation. The Modi government is committed to the cleanliness 'mother' Ganga. This incident is unexpected. The concerned states should take immediate cognizance in this regard.”

The Minister’s statements seems to be another of the Central Government’s rampant and inexcusable Hindu-appeasement actions with utter disregard to the human health and dignity of those dead.