Library with 11,000 books demolished in Mysuru, librarian pledges to restore

The library was founded in January 2011 to encourage many people in the area to read books, the majority of those were in Kannada. 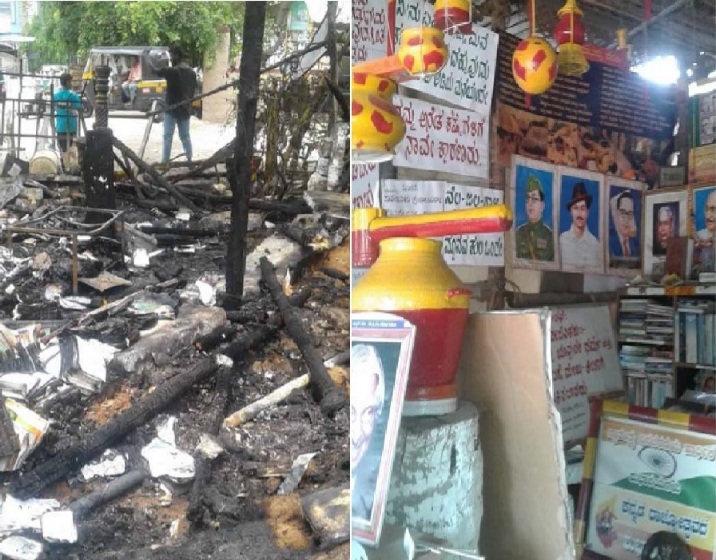 Syed Issaq, a 62-year-old daily wage labourer in Mysuru who kept a library of 11,000 books, was devastated on Friday morning when miscreants set fire to it. The books, most of which were in Kannada, were burned. A resident living near the library told Syed about the fire at 3:50 a.m. on Friday. Issaq hurried to the scene to try to put out the fire, but he was unsuccessful, and the books were destroyed by the time the flames were extinguished by fire department officials. The library was housed in a shed near Amar Masjid in Rajiv Nagar's Corporation Park.

Miscreants had previously wreaked havoc on Syed's library, he said. Following the fire on Friday, he lodged a police report with the Udaygiri police station. The case has been filed under Indian Penal Code section 436 (mischief by fire). Along with his library, a sofa repair shed near the library was also destroyed by fire. According to the police, the area around the library is used as a garbage dump, and it is often set on fire. They believe that this, along with un-stubbed cigarette butts, was the cause of the library's fire.

Syed founded the library in January 2011 in order to encourage more people in his community to read books. "I didn't read (as a child), and I wanted others to read. I kept Kannada and Urdu books because I live in a slum. I wanted Kannada to thrive and develop "TNM spoke with Syed Issaq.

Along with his book set, Ishaq also kept over 17 daily newspapers in Kannada, English, Urdu, and Tamil. His library held 3000 copies of the Bhagavad Gita, as well as copies of the Quran and the Bible. He obtained books from donors, the majority of which were in Kannada. Syed used to work as a labourer cleaning the underground drainage system and doing odd jobs to make ends meet. He said that he wishes to restore the library for the residents of his neighbourhood. "I want to set up a library in the same place, and I don't want to think of this as the end. The library may have burned down, but my desire to establish a library here remains" according to Syed Ishaq.