Amidst ruckus over her poster of Maa Kali and being accused of hurting religious sentiments, Leena Manimekalai wrote, "My Kaali is queer. She is a free spirit. She spits at the patriarchy. She dismantles Hindutva." 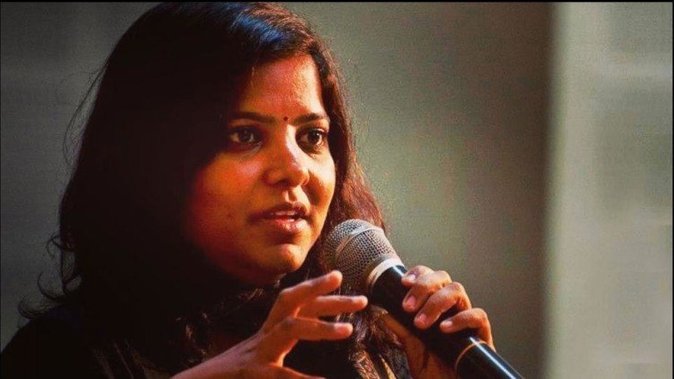 The matter regarding black posters is increasing day by day. There is a lot of resentment among people about its poster because, in the post, Maa Kali was shown smoking a cigarette and holding an LGBGQ flag in her hand. There is also a lot of anger among people against its filmmaker Leena Manimekalai. An FIR has been lodged against Leena and her effigy was also burnt at many places. People are continuously opposing this film on social media and demanding the arrest of Leena, who is being accused of hurting the religious sentiments of the Hindu community.

However, it appears as if Manimekalai is not bothered about all this. Even after so much ruckus, yesterday she posted a picture of two artists who became Shankar-Parvati smoking a cigarette, and today has again made a controversial tweet about Maa Kali. She wrote, “My Kaali is queer. She is a free spirit. She spits at the patriarchy. She dismantles Hindutva. She destroys capitalism, She embraces everyone with all her thousand hands.”

The black poster controversy is on the rise. The Madhya Pradesh Police has issued a lookout circular against the director of this film, Leena. MP Home Minister Narottam Mishra had given a statement that he would appeal to the central government to demand the issuance of a lookout circular against Canada-based director Leena. Only after this, the circular has been issued. Apart from this, a case has also been registered against Leena in many parts of the country.