Announcing her farewell, Justice Chandrachud said to his colleague Indu Malhotra, “You are an icon. Will miss sitting next to you.” 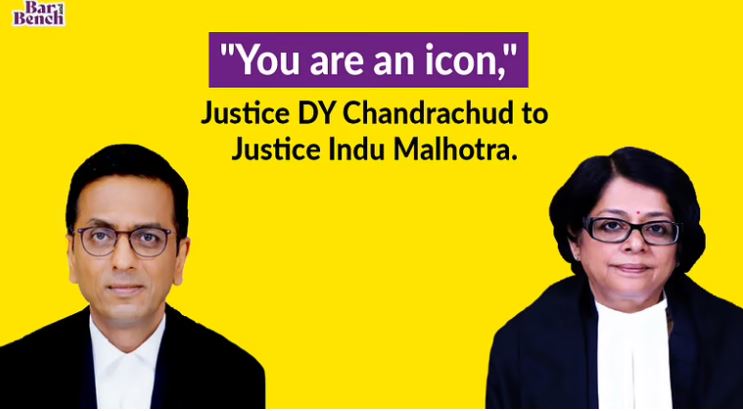 We eulogise women symbolically on the Women’s’ Day without knowing their share in highest spaces. The Supreme Court is left with one Woman Judge and Justice Chandrachud, while speaking at a farewell ceremony organised by the Supreme Court Young Lawyers Forum to honour Justice Indu Malhotra, who was the first woman lawyer to be appointed directly as a judge of the Supreme Court, yesterday, showed concern over the matter.

Such a matter he said, “Must promptly receive serious introspection.” Justice Malhotra who retired from the apex court yesterday took office on April 27, 2018. She penned several important verdicts. One of the most talked about was her dissenting judgement in the historic Sabarimala Temple case. She had clearly stated in that case that judicial review of religious practices should not be done as courts cannot impose their morality or rationality on the form of worship of a deity.

However, she said in her farewell speech that the verdict delivered by the apex court de-criminalising consensual gay sex was the “most moving moment” for her, as the emotions that swept the courtroom at that time was quite overwhelming.

Her leaving leaves the SC with only one woman judge . “Justice Malhotra’s retirement means that the SC now has only one female judge on the Bench. As an institution, I find that this is a deeply worrying fact and must promptly receive serious introspection,” Justice Chandrachud said, adding, “We must ensure the diversity of our country find reflection in making up of our court. Intrinsically having a more diverse judiciary is an end, a goal in itself and worth pursuing in its own sake.”

“As members of legal fraternity we do our bit to ensure that it doesn’t remain as hard as it was for Justice Malhotra for women to climb upper echelons of our profession,” reflecting that it was required that stories such as Justice Malhotra become more common place.

Speaking at the occasion, Justice Malhotra said that for a lawyer it was important to conduct yourself with high degree of professionalism.

“You must be properly attired, professionally at all times and be punctual in your engagements. One issue I flagged when I was called by women lawyers to Bar room after becoming a judge, I said please don’t wear fashionable clothes, which you must keep for the evening and not while you are at work.” “You must be professionally dressed as that’s how you will be perceived by your clients, your colleagues, and the Bench. Second, you must learn to draft in clear and concise manner,” she said.

Announcing her farewell, Justice Chandrachud said to his colleague, “You are an icon. Will miss sitting next to you.” The Bar Council has shared a beautiful image of the two, in its website.

There are several cases of women being harassed by their seniors in the courts, that barely come out. A woman lawyer, seeking anonymity says, “I was clearly told that I had fulfil certain wishes of my senior if I wanted to ‘arrive in life’”.

She adds that she left the court and sought to become a legal adviser with a corporate firm, instead of submitting her self respect.

Such stories need to come out. Justice Chandrachud’s statement must encourage woman lawyers to seek his help and open up with issues that come up with their counterparts, beyond the call of duty.