Earlier, he was admitted to Paras Hospital in Patna. The relatives of Lalu Yadav have shifted from Patna to Delhi for better treatment. 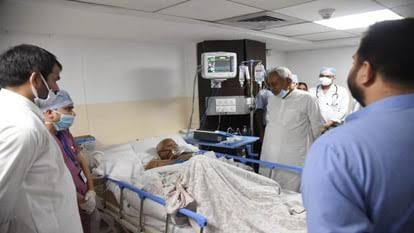 Former Bihar Chief Minister Lalu Prasad was brought to Delhi by air ambulance last night. He has been admitted to AIIMS. The doctors have kept him in the ICU and this morning the condition is said to be stable.

Earlier on Wednesday, Bihar Chief Minister Nitish Kumar visited Paras Hospital and inquired about Lalu Yadav's condition. Nitish Kumar announced that the Bihar government would bear the entire cost of his treatment. Nitish Kumar said that this is the right of Lalu Yadav, and because of this he has taken this decision.

Jharkhand Chief Minister Hemant Soren met Lalu Yadav at Delhi airport and took full details from his daughter Misa Bharti. Chief Minister Hemant Soren wrote on his social media that while going from Delhi to Ranchi, he met RJD supremo respected Lalu Prasad Yadav Ji at Delhi airport. He inquired about Lalu Ji's health from Misa Bharti Ji who was with him. I wish Lalu Ji a speedy recovery and he also shared the picture of this meeting.

Lalu Yadav had fallen from the stairs on July 3. As a result, he suffered injuries to his arm and shoulder. According to sources, Lalu Yadav's lungs have been filled with water. His treatment was going on at Paras Hospital, but later doctors referred him to Delhi.