Lakshadweep on 12-hour hunger strike to protest against new reforms

Thousands of Lakshadweep residents will go on a 12-hour hunger strike today (7th June) from 6 a.m. to 6 p.m. to protest a slew of laws being pushed by the union territory government unilaterally. The decision to go on hunger strike was made at the inaugural meeting of the 'Save Lakshadweep Forum' on Wednesday night in Kochi. 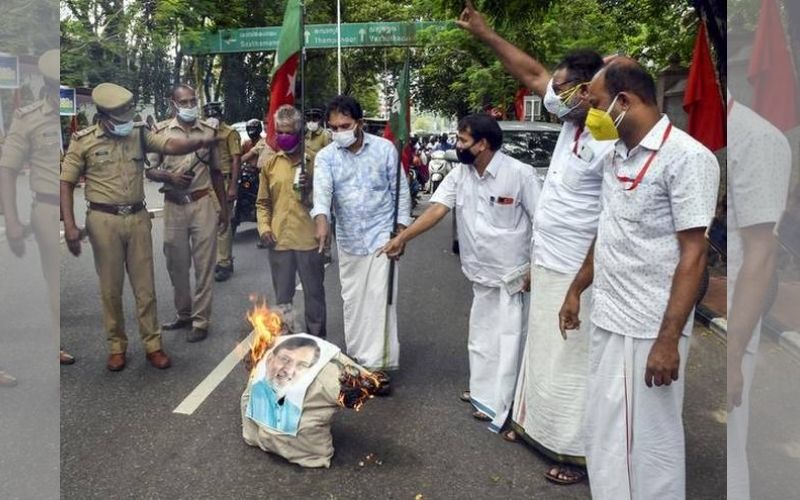 Social Democratic Party of India activists burn an effiggy of Lakshadweep Administrator Praful Khoda Patel outside Raj Bhavan, in solidarity with the people of Lakshadweep, in Thiruvananthapuram, on Wednesday, June 2, 2021.

Residents of Lakshadweep resorted to a 12-hour hunger strike on Monday (7th June) to protest three proposed regulations regulating tourism, livestock, and panchayat elections, which they believe will ruin the island's distinct culture and heritage.

During their first gathering of the ‘Save Lakshadweep Forum,' convened in Kochi on Wednesday night, they decided to go on a hunger strike. Lakshadweep MP Mohammed Faizal, ex-MP P.P. Koya, along with other members of the core committee were present at the meeting on Wednesday. Only those with medical issues or who are undergoing treatment would be exempt from the strike.

Further, the forum agreed to pursue legal action against the draft legislation that is considered to be "anti-people." According to a member of the Save Lakshadweep Forum, a legal cell set up for the purpose is working on it.

While top officials from the union territory administration travelled to all islands to speak with residents about the draft regulations, they were met with disdain with residents demanding an apology from the district collector for "maligning the islanders." They also demanded that the draught law be immediately scrapped.

As the first major protest in the archipelago in the Arabian Sea, local residents will fast in their homes and all shops and establishments, except emergency services, will remain closed from 6 a.m. to 6 p.m., according to the Save Lakshadweep Forum, which was formed to channel mounting protests against rules.

However, the island administration, led by Praful Khoda Patel, has warned that if public spaces become overcrowded, harsh action would be taken under pandemic rules.

“This is the first time that such a demonstration has been seen across the whole island chain. Despite repeated assurances that local concerns would be heard and addressed, the administration continues to make biassed and backward decisions,” said UCK Thangal, one of the forum's convenors.

The proposed laws have been regarded as "arbitrary" and disrespectful to the majority of islanders by several legislators, former officials, and artists. Last week, the Kerala assembly passed a unanimous resolution calling for the administrator's recall, and 93 retired bureaucrats, on Sunday, wrote to Prime Minister Narendra Modi, criticising the new administrator's "partisan attitude" and urging him to protect the islands' unique culture and tradition.

Thangal, the convenor of the Save Lakshadweep Forum, said the UT has been managed by 34 administrations since its creation in 1956, but a scenario like this has never arisen.

“The island has been engulfed by anger and dread like never before. I hope the Union administration recognises the seriousness of the situation and takes appropriate action,” he added, stressing that the demonstrations' future direction will be determined after Monday.

The former officials' letter to the PM claims that the proposed regulations not only neglect the distinctive topography and communal life of islands, but also give the administrator "arbitrary and draconian powers" to purchase, amend, transfer, remove, or displace people from their property. Furthermore, they stated that the Goonda Act (Lakshadweep Prevention of Anti-Social Activities Regulation) is unjustified and uncalled for.

“Because the crime rate on the island is quite low compared to the rest of India,” the letter read, “it has engendered apprehension that the true objective of the legislation is to suffocate dissent or demonstrations against the administration's policies and actions.”

According to them, the draught regulations have been submitted to the Union Home Ministry for approval.