Lackadaisical attitude by the Ministry of Labour and Employment is unpardonable: Supreme Court

On Migrants' Issue: Supreme Court has directed all states to implement ‘One Nation, One Ration’ Scheme 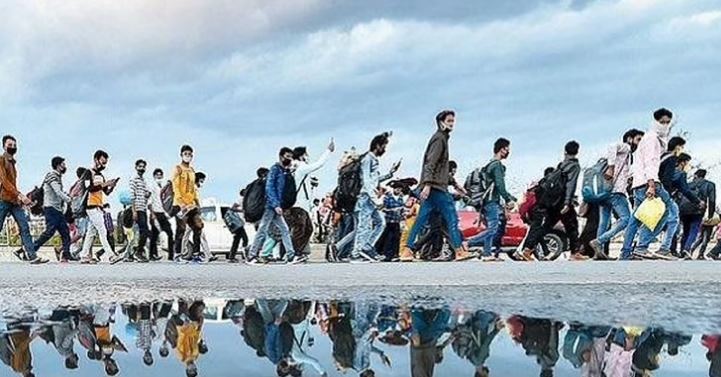 thousands of migrant labourers walking to their homes after the lockdown

The Supreme Court today said, that all states must implement ‘One Nation, One Ration’ scheme, for migrant workers by July 31. Also, it said that the states must “run community kitchens to feed the migrants till the end of the pandemic.”

Earlier on June 11, a bench of Justices Ashok Bhushan and M R Shah had reserved its judgment on pleas of activists Anjali Bharadwaj, Harsh Mander, and Jagdeep Chhokar seeking the implementation of welfare measures for migrant workers hit hard due to the curbs imposed during the second wave of Covid-19.

Today the Court rapped the Union Ministry of Labour and Employment over its ‘Lackadaisical attitude’ and termed it ‘unpardonable’ over the delay in putting up the data.

“The centre's delay in not putting up a portal on unorganised workers and migrants shows it is not alive to the concerns of migrant workers and it is strongly disapproved,” it added.

The Union Government has also been asked to allocate additional food grains to states.

Under the ‘One Nation, One Ration’ scheme, all eligible ration card holders or beneficiaries - covered under the NFSA (National Food Security Act) will be allowed to access their entitlements from anywhere in the country.

The Supreme Court also wants all states to bring in a scheme for distribution of dry ration to migrants. As a reminder, it further added, "States that have not implemented the scheme must do the same before July 31."

Earlier the top court on May 24, had termed the process of registration of unorganised workers "very slow" and had directed authorities to provide dry ration and make operational community kitchens for stranded migrant workers throughout the country.

Last year, India had announced one of the world's strictest lockdowns to check the spread of Covid-19 pandemic leaving many migrants without jobs and means to survive. Many of these even left the big cities on foot to their villages. These distressing visuals and the plight of the labourers had caught the nation's attention.