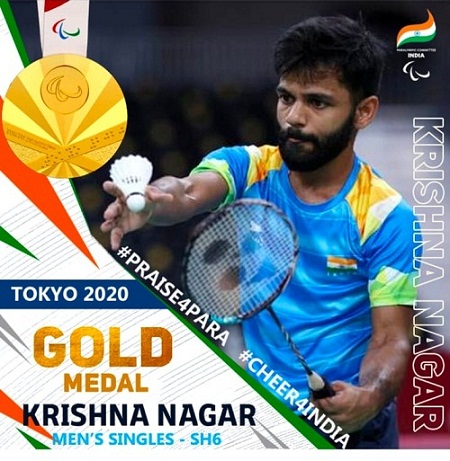 New Delhi: India got the Gold medal on the last day of the Tokyo paralympic 2020. Krishna Nagar has won a Gold medal in the SH6 (SHORT STATURE) category of the men's singles Badminton event. He defeated Chu man Ki of Hong Kong 21-17, 16-21, 21-17. Now India's medal tally reached a total of 19 medals with 5 Gold, 8 Silver and 6 Bronze. On Sunday, Indian Badminton players have won one Gold and one Silver medal.

Earlier, Suhas L Yathiraj, the District Magistrate of Gautam Buddh Nagar in Uttar Pradesh, lost in the final of the men's singles SL4 event and has to settle with a Silver medal, another Indian Tarun also lost in the Bronze medal match against Setiawan Fredy in the same event.

In the Mixed event of Badminton Pramod Bhagat and Palak Kohli lost the Bronze medal match to D Fujihara and A Sugino of japan.

In the Mixed event of Rifle Shooting Avani Lekhara was 28th and Babu got 11th Position.