Kohli's innings to be remembered for decades: Team scored 67 runs against Pakistan, Virat Single-Handedly Made Diwali Better by hitting 82 runs 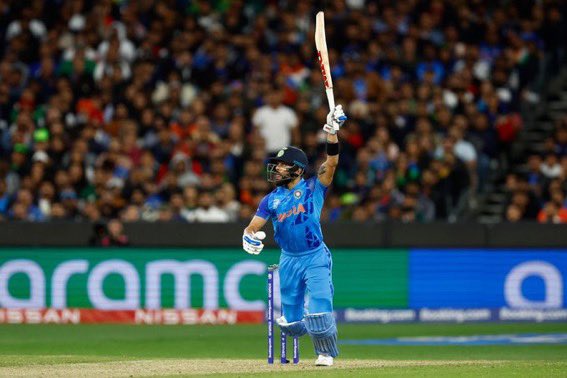 Famous poet Kunwar Narayan once said, "No sorrow is greater than the courage of a man. The one who loses is the one who did not put up a fight." The unbeaten innings of 82 run off 53 balls made the Diwali of 140 crore people of India. He hit 6 classical fours and 4 beautiful sixes during his innings.

Fifth ball of the 19th over, Haris Rauf bowled a slow short length ball. Kohli sent it over the bowler's head for 6 runs and Rauf kept looking at the ball. The next ball landed on the leg stump and it was flicked toward the fine leg by King Kohli with the help of his wrists. Haris bowed down in front of Kohli and from here the whole match changed. In the last over, India needed 16 runs to win and what happened after that became history.

Virat Kohli said about this over, 'Things were very difficult. One wicket after the other was falling. But Hardik standing on the other end kept giving me confidence. Keep saying it will happen. We got the boundary at the right time. I knew that if Rauf was attacked, they would panic. 28 runs were needed in 8 balls. Two sixes were required off Rauf's last two balls. I don't know how to explain those two sixes. All my focus was on watching the bowler till the last moment.

I always used to say before that I played the best innings in T20 against Australia in Mohali. This inning is also similar to that, but now I will keep this innings ahead. The audience has consistently supported me over the last few months. Thank you all for this.'