Parit Chiwarak, among one of the dozen anti-government demonstrators detained on charges of lese majeste and sedition, said he's "ready to participate in every demonstration after the current wave of outbreak ends." 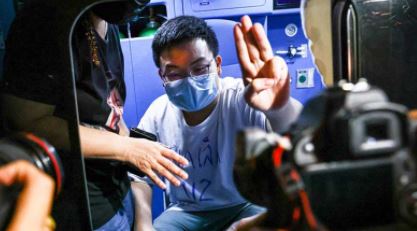 Parit Chiwarak makes the three-finger salute as he is released from Bangkok Remand Prison on 11th May.

After being released on bail, a top Thai pro-democracy activist who had been detained for three months for suspected royal defamation said he would "continue to protest for monarchy reforms."

Parit Chiwarak, among one of the dozen anti-government demonstrators detained on charges of lese majeste and sedition, said he's "ready to participate in every demonstration after the current wave of outbreak ends."

Parit had been detained for 93 days and had been on a hunger strike for the last 57 days before being released late on Tuesday. His release came only a week after Panusaya Sithijirawattanakul, another influential leader, was granted bail after serving two months in detention.

Last year's youth-led protest movement, which demanded Prime Minister Prayuth Chan-Ocha's resignation and constitutional reforms, attracted hundreds of thousands of people and broke long-held taboos on openly criticising the royal institution. However, a resurgence in virus outbreaks this year, as well as a government crackdown on demonstrators, hindered it.

According to Thai Lawyers for Human Rights data from 11th May, at least 15 activists are currently in custody pending trials, including four representatives facing lese majeste charges.

On Wednesday, a call to the Royal Household Bureau went unanswered, but the bureau has previously stated that it does not speak to the press.

Despite the fact that the court has barred Parit from offending the monarchy or encouraging protests while on bail, he claims that his call for change does not constitute defamation of the monarchy and that he has always followed the nonviolence principle.

He wrote on Facebook, "The battle for democracy will continue with speed and strength. No power is greater than the facts, so our war is focused on the truth.”