Today the meeting concluded in a friendly atmosphere and we both discussed many issues of the city. I have requested them to work together for the issues related to the municipal corporation. 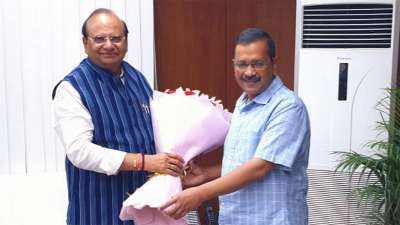 Kejriwal also said that the issues of 'mountains of garbage' and improving the sanitation system in the city were also discussed during the meeting. When asked about the ongoing tussle with the Lt Governor on several issues after the raid at Sisodia's house, Kejriwal said, "Whatever happened was unfortunate. I hope the situation will improve now. Today, there was a very good atmosphere between both of us. Let us tell you that recently the Lieutenant Governor asked the Kejriwal government to release Rs 383 crore pending for 2 years of MCD.

Saxena had asked Chief Minister Arvind Kejriwal to release Rs 383.74 crore dues of the Municipal Corporation towards education and health items. The LG's office shared a letter written by Saxena to the Chief Minister on Twitter on Wednesday, saying that he has requested him to release the outstanding amount pending for the last two years. He has written in the letter that the condition of primary education and health in Delhi is being affected very badly by stopping money 'unnecessarily'. The issue of release of money is a big reason for the confrontation between AAP and BJP.