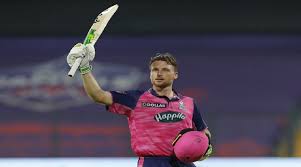 Rajasthan Royals opener Jos Buttler played a brilliant innings in Qualifier 2 against RCB and scored an unbeaten century to take his team to the final.