Jharkhand Chief Minister Hemant Soren's membership in the Legislative Assembly has been canceled. 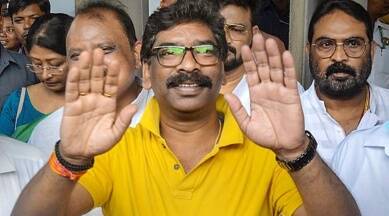 Jharkhand Chief Minister Hemant Soren's membership in the Legislative Assembly has been canceled. After this decision, CM Hemant can resign today itself posy which he can take oath as CM again by giving letters of support of MLAs to the Governor. According to sources, in the Office of Profit case of Hemant Soren, the Governor has recommended the cancellation of his assembly membership.

In the case of taking the lease of the mine lease of the CM, the Election Commission had recommended the cancellation of membership to the Governor on Thursday itself. No decision has been taken in the matter of disqualification from contesting elections. However, Raj Bhavan has not officially confirmed this. The Election Commission will issue its notification which will most likely be released tomorrow. At the same time, ministers and MLAs engaged in CM House have started gathering.

Before this, there is also a meeting of the Grand Alliance Legislature Party in the CM House. MLAs of JMM, Congress, and RJD were present at the meeting. The political situation was discussed in the meeting. At the same time, Governor Ramesh took the opinion of Solicitor General Tushar Mehta in this matter. Along with the Chief Electoral Officer of Jharkhand, he also talked to the legal experts of the commission and other senior officials. This has put the Jharkhand government in trouble.

The BJP had accused Hemant Soren of taking 88 decimal stone mining leases in Angada, Ranchi while being the Chief Minister. After this, the Governor sought the opinion of the Election Commission on this matter. On Thursday, the special envoy came from New Delhi to Ranchi and handed over the opinion of the Election Commission to the Raj Bhavan in a sealed cover. According to information received from JMM sources, if Chief Minister Hemant Soren's chair goes, then his wife Kalpana Soren can be made the Chief Minister.