Jammu's lawyers got furious, gathered in the court premises and raised slogans against Pakistan

In such a situation, it is necessary that along with breaking the back of terrorists, the security of the people should also be strengthened. The lawyers organized this demonstration under the banner of Jammu and Kashmir High Court Bar Association. 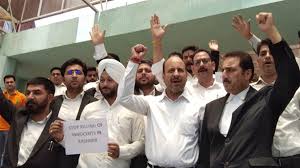 Expressing anger over the killings of Hindus in the Kashmir Valley, lawyers on Saturday staged an anti-Pakistan protest at the court premises in Janipur. The protesting lawyers raised slogans against Pakistan, blaming Pakistan for these killings.

After the protest, Senior Advocate MK Bhardwaj, President of the Association, while addressing the journalists said that the killings in Kashmir are a conspiracy of Pakistan. Pakistan is a weak country and cannot compete with India. That's why for years he has been promoting terror in India. Pakistan has bled Kashmir in the past and now it has hatched a conspiracy like target killing.

Appealing to the central government and the Jammu and Kashmir state administration to strengthen the security of outsiders in Kashmir, Bhardwaj said such killings are a matter of great concern and today everyone working in Kashmir is in fear.

Bhardwaj said that the security forces in Kashmir have done a commendable job in crushing the terror and now it is the need of the hour again to stop the target killings by bringing in confidence and to create such an environment in Kashmir where every person is safe.