During the accident, there was an outcry among the passengers of the bus. Police immediately reached the spot as soon as the information was received. 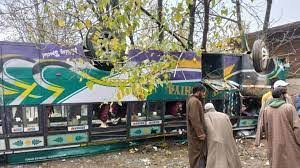 A bus met with an accident in Kupwara, Jammu and Kashmir. Due to which about 20 people were injured. All the injured have been admitted to the hospital. The accident happened in Vatayin area of ​​Handwara, Kupwara. According to the information, the bus was moving at a very high speed. Due to which it overturned uncontrollably.

During the accident, there was an outcry among the passengers of the bus. Police immediately reached the spot as soon as the information was received. The injured are being identified and taken to the hospital. The good thing is that there is no news of any death so far.

Last 5 days ago, a roadways bus rammed into a tanker on the Agra-Firozabad highway in Agra, Uttar Pradesh. Due to which both the vehicles were badly damaged. Two people were killed in this incident, while more than two dozen people were injured.