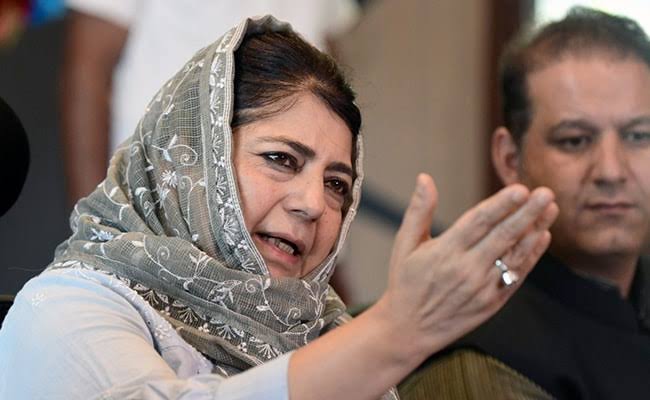 Mufti shared on Twitter pictures of a CRPF (Central Reserve Police Force) vehicle parked outside the closed doors of his residence in Gupkar area of ​​Srinagar. The former Jammu and Kashmir chief minister alleged that the "senseless policies" of the central government led to the killings of Kashmiri Pandits. He said, 'The Indian government, through its senseless policies, wants to make the condition of Kashmiri Pandits worse. These policies led to the targeting and killing of those who chose not to flee. I have been kept under house arrest today with a view to projecting us as our main enemy.

Mehbooba said that her efforts to meet Bhat's family in Chotigam were foiled by the administration. "The same administration claims that we have been put under house arrest for our safety, while they themselves can go to every corner of the valley," she added

Mehbooba Mufti had recently targeted Mehbooba Mufti over the new rule of voting in Jammu and Kashmir. He said that this is the last nail in the coffin of electoral democracy. He said that people's confidence has now been lost due to voting. Hitting back at the BJP, he said that today they snatched the Constitution and flag of Kashmir, tomorrow they will snatch your rights too. Mehbooba Mufti had also recently held a press conference on this issue. In the press conference, Mehbooba had said that more than 25 lakh non-local voters are being included in the voter list of Jammu and Kashmir. Which is the last nail in the coffin of electoral democracy. If they had the courage, they would have done it through Parliament, I would have considered it legal. After the elections of 2024, they will also abolish the constitution of the country and will wave the flag of the country in saffron flag. They want to make this nation a BJP nation.